The Art Of Exiting: Angel Investor Sanjay Mehta On Angels Not Relying On IPOs, Defining Healthy Exits And More

The Art Of Exiting: Angel Investor Sanjay Mehta On Angels Not Relying On IPOs, Defining Healthy Exits And More 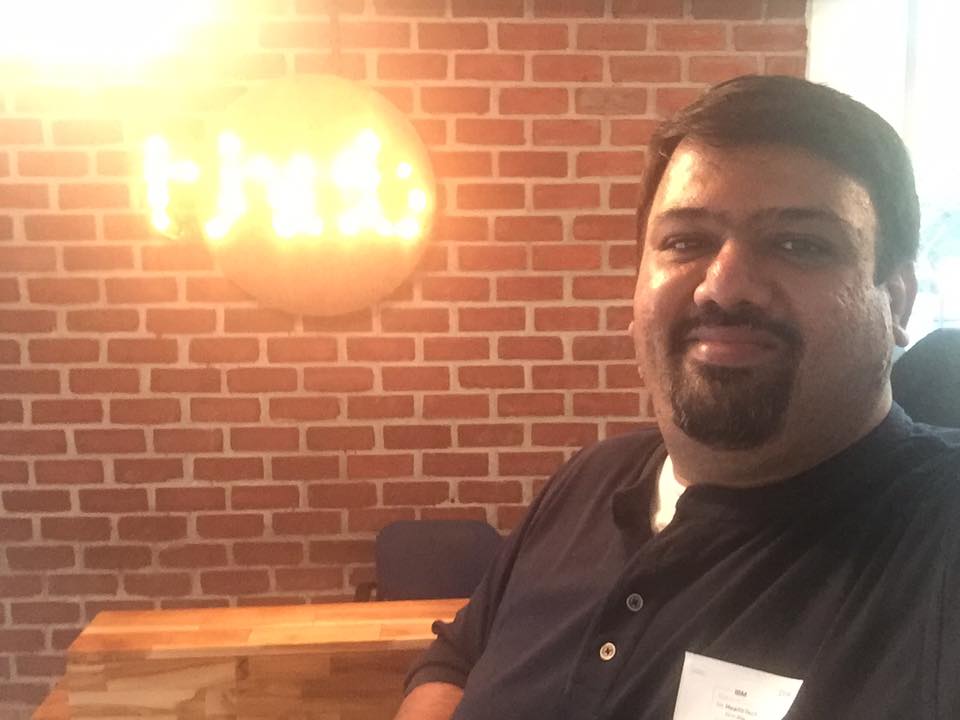 [Note: This article is part of The Junction Series. Sanjay Mehta will be speaking at “The Junction” in Jaipur in January 2017. Get a deep dive on angel investing, investment thesis, exit strategies with him. Learn more about The Junction here!]

So while the good news is that in the first six months of 2016, India saw the third-highest tech startup exits, the fact remains that in Indian tech companies most of the angels have no exit strategy in place. While angel investors have been investing vigorously in Indian startups in the last six-seven years but very few angels have exited successfully. They only hope that someday they will be able to exit but without having a clue of how to move across from building their portfolio from an investment to an exit.

But how does one build a successful exit strategy, besides hoping for the best?

Sanjay Mehta, the serial angel investor who has invested in 60+ portfolio companies, and has seen a substantial number of good exits, including a mega exit with OYO Rooms, where he saw returns almost 280x as an angel, demystifies the fog around exits in India. In a talk with Inc42, Sanjay spoke about why IPOs are not an option for angels and how they can successfully steer their portfolio to good exits.

“IPO Is An Option, But In Reality, You Can’t Exercise It”

Many entrepreneurs write in their pitches that IPO is a plausible exit option but Sanjay thinks that’s not the case. He explains,

On the IPO side, we have got big trouble in India. India’s IPO process is totally broken. So any angel/ entrepreneur thinking that they would lead their startup to IPO, that’s a dream.  It’s very compliance-driven, and there are financial and technical glitches in terms of rolling out an IPO. On top of that, it is a very expensive process in India. In comparison, M&A is very simple.

Hence, these challenges make it difficult for a startup to fit into an IPO process. And this is something that he feels that most angels and entrepreneurs should very clearly understand, that while it is an option, in reality, one cannot exercise it.

“We Don’t Have Mega Exits In India”

Sanjay feels that even though India is positioned as a hot tech startup ecosystem, the critical mass of good exits – the 30x-40x kinds – are missing. While angels should look at a minimum of 10x-20x at least, today angels are looking at 2x-3x kind of exits and are happy about it. But this trend hardly bodes well for the ecosystem because exit as a metric is a very important factor for evaluating any startup ecosystem.

As much as startups are hacking growth, angels need to start hacking exits.

He explains, “High-value return exits for angels guarantee a strong ecosystem. In my perspective, why Silicon Valley is growing and still leads the world is pure because of exits. They are able to get those exit valuations. Once exits are there, you are able to attract talent pool, entrepreneurs, and more VCs in the ecosystem. So if India needs to ape across the ecosystem, we need to start hacking exits. As much as startups are hacking growth, angels need to start hacking exits.”

He adds that while India has a plethora of accelerators, incubators which prepare companies for investments, pitching to angels, and provide mentorship and training, but not even a single accelerator is helping them build an exit strategy. Consequently, while exits are happening in India, their monetary value is not high. Hence, these mega exits are missing in the Indian startup ecosystem.

Furthermore, even if one talks of good exits such as those of Ola, Flipkart, OYO, what one needs to remember that they are one of those B2C kind of unicorns. But not many of them exit. Sanjay stresses that what angels should be looking at is more of enterprise, SaaS based software – the general B2B businesses, where the number of exits can be quite promising. Because those present an opportunity to make that 30x-40x kind of exit.

As an angel entrepreneur, one has to constantly focus in terms of building his portfolio towards exits. While an angel’s duty is to support his startups at every point, yet he should also be keen in creating that platform which can bring in the right offers. For that Sanjay feels that angels need to be proactive on certain counts. One of them being pushing their portfolio companies to be more media savvy.

Says Sanjay, “Startups who have been able to get great exits, or at least have been seen potentially as an exit-able startups, are great with media and PR. So, as an angel, I would push my portfolio company to be more media savvy. While every startup is trying to get media attention, typically they have got a problem in terms of telling the story. And that too, they are not continuous. They do it in spurts; they go out in media and then suddenly go silent. These blip kind of appearances do not work. So an angel has to ensure that his portfolio company gets differentiated in media, and creates that typical vendor neutral commentary for that sector.”

The motive is simple – to create interest in that sector as many times, potential investors look for a sector first and then zero down on companies. Being visible dramatically increases the odds for good exits.

Secondly, the angel should focus on the fact that his portfolio companies have the right team. This means they should not be led by a one-man army. If one is looking at getting acquired from large IT giants or such, and get a large multiple, a saleable team creates a big niche and differentiation.  Because these acquirers are not only looking to buy a disruptive IP, they are also looking to buy the team.

Which brings us to the next thing angels should pay attention to – the capital structure. It goes without saying that it is easier for companies to get acquired when capital structures are simple, and thus easier for angels to exit. Explains Sanjay, “If you have a complex structure like say company is registered in Singapore, holding company is in Cayman Islands, operating entity is in India, then it very difficult for somebody to figure out where do I buy? As an angel, I have to ensure that your capital structure is simple, so that it is easy for someone to acquire you.”

And that’s also why it is important for angels to build good relationship with potential acquirers. Adds Sanjay, “That’s your basic duty as an angel. This is not a few weeks or a few months journey. It takes couple of years, for you to actually create that sale or acquisition. You don’t want to be in a position where you run out of cash or you have to go for a distress sale. So, one has to work towards creating the right circumstances for that ideal acquisition offer to come from the table at their end.”

But, most importantly, angels should see if they can help entrepreneurs build balance sheets that are very strong – which means rather than an investor’s capital, there are actual cash flows. He explains, “Where ever there are cash flows, the valuations are very high. If it’s just investor’s money and zero cash flows, acquisition will happen but they tend to go cheap. You will never get a good value. So you have to help the startups to find a way to create those cash flows. Typically you would want them to be self-sufficient because it plays a big role in getting the right valuation.”

Consequently, an angel should also be able to help entrepreneurs pace and focus on cash flows, than just thinking about the next round. Eventually, when an exit happens, both kinds of cash flows will help you get your multiples. But the overall idea is that you lead your way out to exits rather than being pushed into them by a distress sale.

Sanjay explains that typically three exits matter in today’s world- one is the financial exit, which is the best possible exit. In that, VCs buy an angel out because they are looking for a higher valuation in the next rounds. Such exits give angels 50x to 100x returns.

The next exits are corporate exits where corporates acquire the portfolio company, giving the angel an exit value from anywhere between 10x to 20x. These are average financial exits but these are healthy exits. Third comes the acqui-hire, where one is just trying to place the team and get his capital back. The angel’s aim should be a financial exit and acqui-hire should be his last resort.

Sanjay stresses that in this whole process of funding a startup and exiting; it’s important for angels to protect their rights. That’s precisely the reason specific rights such as exit rights have been incorporated. So whenever up rounds are happening with VCs, one should be protecting his rights so that one’s exits are secure.

Also, one needs to remember that angels are investing their money in a very risky asset, so the whole process is fruitful only if one gets those multiples. Hence, once an entrepreneur has embarked on the journey of raising capital from angels, it is the moral, financial, legal liability of the entrepreneur to return the capital.

Explains Sanjay, “This is someone funding you with the perspective saying that we will give you an exit. So it’s not about grant or a loan or charity. Angels are investing their money in a very risky asset, so they would like to have those 10x multiples which help him make his money. And at the end of the day, the money will go back into the startup ecosystem as another investment in yet another startup.”

He further adds, “I always tell entrepreneurs, get real. While funding is glamorous, get real. Your customer list, your relationships, everything is valuable. Don’t destroy yourself by running out of cash.  You will never be able to recover faith from those set of people whom you have let down.”

For angels, his message is try to create a strong balance sheet where companies are not running on funded capital but cash flow.

For angels, his message is try to create a strong balance sheet where companies are not running on funded capital but cash flow. The timing for exits is different from startup to startup and transaction to transaction but he is very clear that one should be thinking about exits from day one. One might not take the exit in the end, that’s a different story, but one should never postpone thinking about an exit strategy.

When it comes to his exits, as an entrepreneur Sanjay has seen two exits (Udyog Software and MAIA Intelligence), and as an investor, has seen a bumper exit with OYO, and three good exits. Out of the 60 plus companies in his portfolio, 14 have moved to Series A and half a dozen are at series B. Sanjay is happy the way he has been able to build these for the next round with VCs. And for that, he credits his personal exit hypothesis -“I believe that in about 80% of the opportunities, you take an exit while in 20% you stay put for a longer run.”

Angels, are you listening?

P.S. Sanjay Mehta will be speaking at Inc42’s first ever flagship conference “The Junction” in Jaipur in January 2017. Get a deep dive on angel investing, investment thesis, exit strategies & more!
facebooktwitterwhatsapp