A source tells Inc42 that the video was not sponsored by Unacademy, but the company is working on content curation and a grievance redressal system

Later, cofounder Gaurav Munjal took to social media to address the issue and confirmed the plans to make an open and transparent reporting process for grievances against educators or content 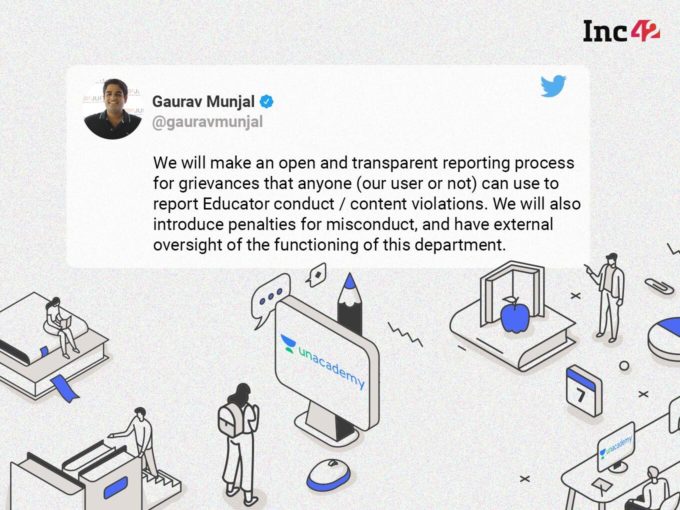 In 2020, last year, Rourkela’s Soyeb Aftab was in the limelight for topping the NEET 2020 exams. A year later, the MBBS student from AIIMS-Delhi, and edtech unicorn Unacademy (where he is a content affiliate), drew flak on social media for all wrong reasons — hosting a skit that mocked a famous religious epic.

Social media users rebuked the take on the Ramayana and said that the students have insulted the Hindu religion in their attempt to be humorous. The AIIMS students’ body and the students who posted the video, have claimed that this was in light fun and jest.

Unacademy was later dragged into the controversy, where the NEET topper is a contributor for content on study tips and techniques through Unacademy Vlog. Social media users also alleged that while the students insulted the Hindu epic, Unacademy had supported the “mockery of Sanatana Dharma” by putting up the video on its platform.

While Aftab is neither an educational contributor nor a teacher at Unacademy, he was an affiliate with the firm. The startup partners with several affiliates — ex-students, industry mavericks, etc — who upload short snippets such as exam prep guides, brand partnerships and conversations between people at Unacademy and coaches, etc.

The video in question was claimed to be created for and in affiliation with the Unacademy Vlog. While it was uploaded on Aftab’s personal YouTube channel AIIMS Insider, the video reportedly ended with a logo of Unacademy Vlogs.

Reports also suggest that the startup also tweeted the video but later took it down. Inc42 could not independently verify the allegation.

This created a row on social media with people questioning Unacademy’s commitment towards the religious sentiments of its users and the public at large. It led to the “#ShameOnUncademy” trend on Twitter.

A source told Inc42 that the video was not sponsored by Unacademy. The company does not curate every piece of the content that goes on the web in its name. It instead provides set guidelines for affiliates to comply.

The source also added that the startup, post this incident, has started working on creating multiple levels of curation and reporting systems to curb such incidents.

Post this incident, Gaurav Munjal, cofounder, Unacademy, took to social media to address the issue and quoted monthly numbers such as 4K+ teachers, 1.5 Lakh classes and 6 Cr+ students, to adduce that the startup has a massive scale.

“Since we cannot monitor each and every Live Class manually, we will build strong reporting systems. And, whenever there are any lapses that violate our guidelines, we will take due action,” he said, mirroring the idea of grievance panels.

According to Munjal, the startup plans to make an open and transparent reporting process for grievances that anyone (an Unacademy user or otherwise) can use to report the educator’s conduct or any content violations. The offenders will be liable for penalties.

This is not the first time Unacademy has fallen prey to communal controversies. Previously, Unacademy was rebuked for a question in its mock CSE papers inciting hatred between two Indian communities.

Not just Unacademy, recently Zomato also created news when people started questioning its commitment towards the non-Hindi speaking region and its alleged “preference” for people who speak in Hindi. A customer care executive’s comment to a Tamilian consumer that “Hindi is national language” led to the “Reject Zomato” trend on Twitter.

A couple of days ago, FabIndia also faced the brunt of netizens over its latest traditional wear collection titled “Jashn-e-Riwaaz”, alleging the de-Hinduisation of the festival Diwali. Another incident with Manyaavar recently, featuring Alia Bhatt, faced a boycott over its ad based on the Hindu tradition ‘Kanyadaan’. In the past, jewellery brand Tanishq was also trolled for their advertisement on inter-faith marriages.