Echo Input is the first portable smart speaker by Amazon

Google is yet to launch a portable speaker in India 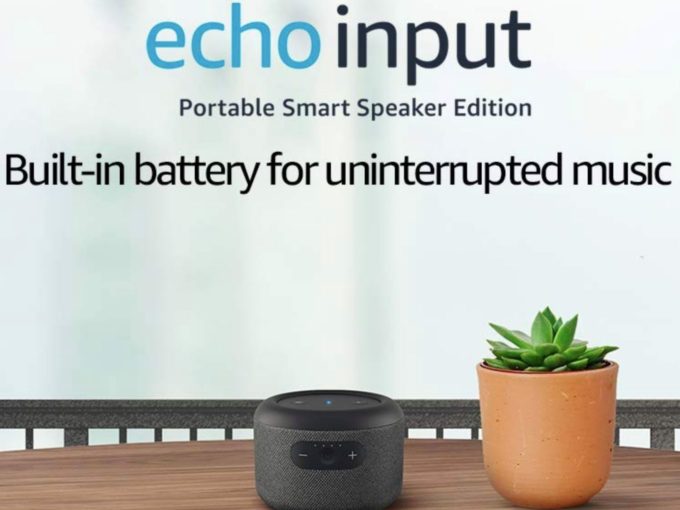 Since its launch in 2017, Amazon’s Echo series has changed the way how Indians used to think of speakers. And now to provide Echo users with the facility of portability, Amazon has launched its first portable smart speaker — Echo Input.

Besides enjoying listening to music, smart speakers have enabled their users to get hands-free help and news updates, among others. Earlier, most of the smart speakers available in the Amazon’s Echo lineup or Google’s Home or Nest series have to be plugged in at all times, keeping users away from enjoying a completely wireless less experience.

However, now Amazon’s Echo Input is going to provide users with the facility of portability which they have always looked for in a smart speaker.

Parag Gupta, head of Amazon Devices India, said that customers in India told Livemint that they wanted a hands-free experience with Alexa and they should be able to move it from room-to-room. And thus, the company came up Echo Input, he added.

What is Echo Input?

The first of a kind, Echo Input, will enable users to carry their speakers anywhere in their home. From enjoying songs with a cup of tea at the balcony to reciting bedtime stories to kids in the bedroom, the newly launched Alexa Echo Input will let their users do everything they had always wished from a speaker.

Moreover, Echo Input comes with fabric design and 360 degrees surround sound. Users can simply unplug the device and can carry it around while listening to music.

The newly launched smart speaker packs itself with a 4,800 mAh battery and promises to provide a backup time of around 10 hours. Moreover, Amazon for Echo Input has always taken care of the liquid spills as it claims that the new smart speaker is splash resistant.

Further, to increase the reach of its voice commands while streaming music, the speaker features four microphones that are built atop.

Launched first in India, Amazon has initiated the pre-booking of the device which is set for live orders from December 18, 2019. While Amazon has priced Echo Input at INR 5999, the company currently is selling the smart speakers at INR 4999, a 17% discount from the set price.

Moreover, when it comes to the design part, Echo Input has a cylindrical form-factor which is similar to the lines of the flagship Echo speakers.

While users will find everything improved in the new Echo Input, however, in terms of performance, the new smart speaker, which weighs — 581grams — comparatively lower than its earlier versions, won’t be able to deliver as much sound like the earlier devices due to lower power supply.

According to research firm International Data Corporation (IDC), Indians are bringing more smart speakers to their home. Notably, in 2018, 7.53 Lakh smart speakers were shipped to India with Amazon’s Echo series accounting for 59% of these orders.

Moreover, Google, which has recently launched the Nest Mini — the second generation of its smart speaker range, is yet to offer any portable speaker range.