Effective from May 23, Amazon India will increase seller commissions on specific product categories As ecommerce companies continue to explore ways to grow their business after the implementation of the foreign direct investment (FDI) guidelines in ecommerce, Amazon India has now revamped its seller commissions across half of its product categories in order to reduce subsidies, improve business margins and also provide incentives to sellers in the high growing categories.

In a mail to the sellers, Amazon India has informed that, effective from May 23, it will increase commissions on product categories such as watches, luggage, shoes, beauty products and mobile phones, and reduce them on home furnishing, sports items, fashion jewellery, handbags and musical instruments. The changes range between 0.5% and 2% across the categories.

Citing Gopal Pillai, vice-president, seller services at Amazon India, an ET report said that these changes have been introduced after taking feedback from the sellers. The changes were necessary after considering business structure changes, margins change and inflation.

While the cuts in commission may not be appreciated by some of the online sellers, industry experts reportedly believe that this move will help the ecommerce giant control its cash burn and reduce incentives it gave to its sellers to scale up. Online seller’s representative body All India Online Vendors Association has taken to Twitter to express their disappointment over this change. 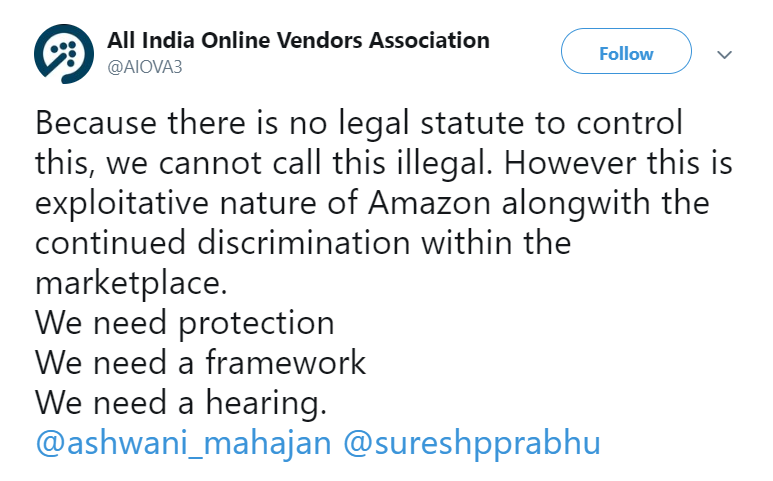 Apart from this, Amazon has also increased logistics fee structure and also raised charges for promoting lightning deals. Also, it introduced an item listing charge for listing more than 1 lakh products per seller. It also marginally increased its weight-handling fee for its Fulfillment by Amazon and Easy Ship business.

Amazon’s move marks a departure from its earlier strategy when it reduced its commission charges to attract more independent sellers in February post implementation of FDI rules. The commission had been reduced by 35% for famous fashion sellers and by over 50% on specific FMCG categories.

In December 2018, the government notified changes for large online marketplaces with the new FDI policy for ecommerce. Following the implementation of the FDI in ecommerce guidelines on February 1, ecommerce marketplaces were barred from selling products from companies where they own a stake.

The rule also directed that marketplaces will not mandate a seller to sell products exclusively on its platform. It also prohibits the companies from making more than 25% of purchases of a vendor.

With the new rules in place, Amazon and Walmart’s had together lost $50 Bn in market capitalisation. Earlier in March, it was reported that Amazon’s Global Store is losing its virtual presence in India after it witnessed a sharp fall in the items listed on the platform. The global store which was launched in by Amazon India in 2016, allowed the users to buy products directly from the Amazon US website.

Thus the ecommerce companies are now tweaking its strategy to continue to expand its business and maintain its position in the sector.

Walmart-owned Flipkart is also building a layer of B2B entities code-named Alpha Sellers, who will act as intermediaries between its wholesale arm, Flipkart India and its prominent online sellers in order to comply with the norms.

At a time when the ecommerce sector in India was expected to grow to reach $ 200 Bn by 2026, the government policies may cause the ecommerce companies to switch and adopt new business models to grow their business in India.

The situation has become complex for the foreign giants who have been betting on the homegrown etailers. Earlier, Walmart chief executive officer Doug McMillon had expressed disappointment over the revised FDI norms and said that they hope for “more collaborative regulatory process” in future.