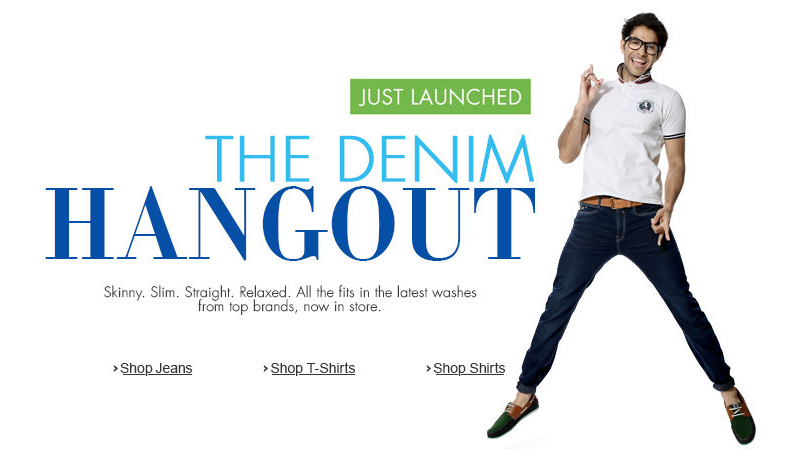 It has launched The Denim Hangout i.e. a concept store that represents more than just the blue jeans, it is designed to cater to various lifestyles that men choose to adopt. From rock star chic to corporate cool, brands like Levis, Pepe Jeans London, Lee, Wrangler, Jack & Jones, Lee Cooper, Newport etc. offer everything a man would need for his wardrobe.

Various products available on the new store include Denim shirts, jackets, waistcoats, conversational T-shirts, trendy leggings and accessories like wrist bands, belts, bags, shoes, wallets, caps and much more will soon be added to the store.

“The average number of denims a man has in his wardrobe is four. Chances are that they are all of the same fit, wash and style. Once they have decided a fit or wash tone that suits generally men refrain from stepping out of the familiar zone. The resistance to change comes primarily from the lack of awareness of various options or the lack of knowledge of how to adopt these options to one’s needs. The Denim hangout at Amazon.in breaks down the elements of denim lifestyle and simplifies it for our customers,” says Vikas Purohit, Category Leader, Fashion, Amazon India.

With this it has also launched Men’s Innerwear Store, with over 1300 styles offered by brands like Diesel, Hanes, French Connection, Eminence, Crusoe, Chromozome, VIP and more across briefs, boxers, trunks and vests. “Almost half of the innerwear market in India is unorganized and unstructured with inner wear often sold in an unengaging ambience leading to awkward conversations with sales staffs that both male and female shoppers choose to avoid. Amazon.in recognizes this and endeavors to make it less traumatic for men to shop for essentials. Not only is the selection exhaustive but also presented to appeal to both genders alike,” added Vikas.

Amazon.in had marked its entry into Apparels last month with the launch of ethnic and Indo-western wear for women in April and had launched intimate apparel store for women launched.

Recently it has launched its Kindle Cloud Reader, a free Kindle reading app that enables customers to read Kindle books instantly using only their web browser. Also, the marketplace has launched a Wearable Technology store offering wearable tech to its customers.