After Elon Musk’s Twitter Tirade, Telangana Minister KTR Invites Him To Set Up Unit In State

After Elon Musk’s Twitter Tirade, Telangana Minister KTR Invites Him To Set Up Unit In State 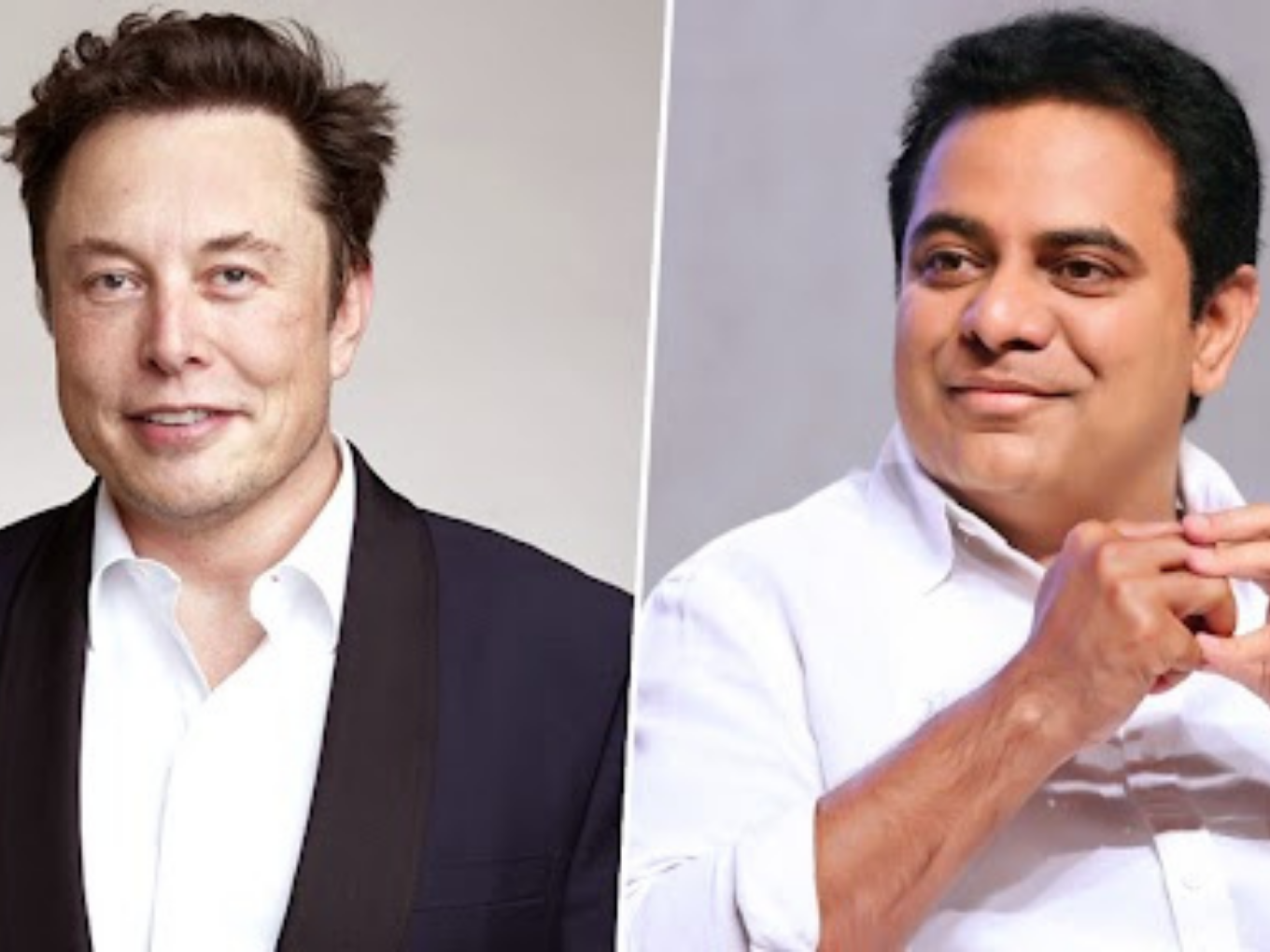 Will be happy to partner with Tesla in working through challenges, tweets Telangana Minister

The government, on the other hand, is adamant that Tesla should produce in India rather than assemble Completely Knocked Down parts (CKD)

Telangana Industries’ Minister KT Rama Rao has reached out to Tesla boss Elon Musk, asking him to set up a unit in the state.

This comes barely a day after Musk tweeted that his company “was still working through with a lot of challenges from the Government.” In reply, Rao tweeted, “Will be happy to partner Tesla in working through the challenges to set shop in India/Telangana.” 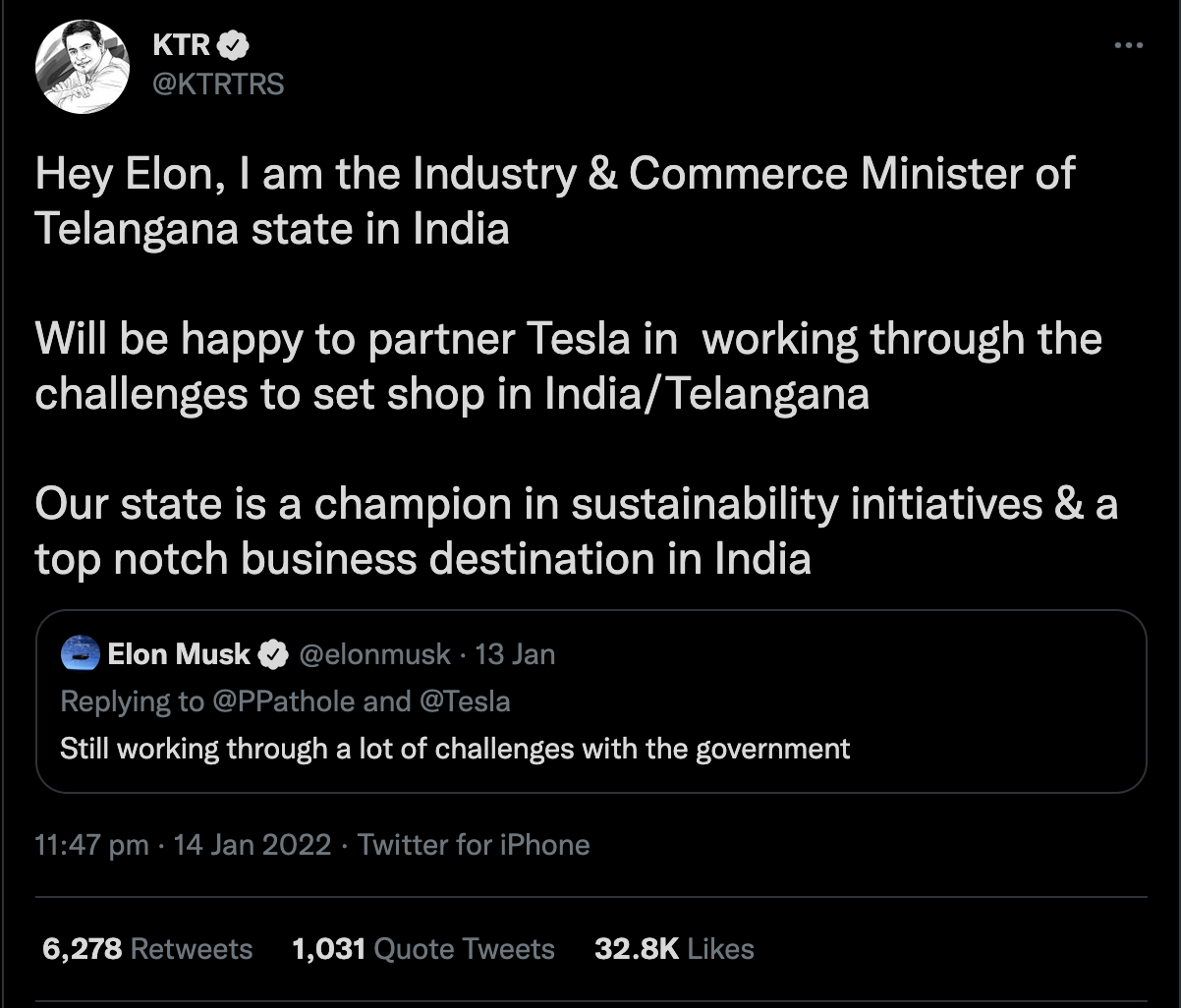 The proactive Telangana Minister and TRS scion, KTR, is known for hard-selling Telangana which has been a top draw for marquee companies like Google, Apple, Microsoft among others. He recently rolled out the red carpet for Kerala’s Kitex Group, which later inked a pact involving an investment of INR 2,400 Cr in the state.

The conversation drew hilarious responses from the Twitterati with many backing the idea of bringing the electric auto-maker to India.

The Tesla CEO has been at loggerheads with the centre for many years now over issues ranging from a local factory to the country’s high import duties. Tesla has been lobbying the government to slash import taxes on electric vehicles before it enters the market.

The government, on the other hand, is adamant that Tesla should produce in India rather than assemble Completely Knocked Down parts (CKD). Government sources were quoted by Economic Times as saying, “Tesla is trying to put pressure on the Government using social media, and this is not the first time.”

Earlier, Inc42 had reported that the Indian government had told the US-based electric vehicle (EV) automaker to first start manufacturing its electric vehicles in India and then seek any tax concessions.

Tesla boss is known for his outbursts on Twitter and has been vocal about issues related to reducing import duty on imported EV cars. According to reports, previously, Musk also sought a meeting with PM Modi to lobby for slashing import duties.

Government is apprehensive of any tax rebate to Tesla as it could ruffle feathers in the EV auto industry. The move might send a bad signal to other auto manufacturers who are complying with the current import tax norms.

Back in India, Tesla faces tough competition from local manufacturers. Barely days ago, Mercedes-Benz announced that it will launch India’s first locally produced luxury electric car this year itself.

While auto-makers such as Mahindra, Tata, Maruti, along with foreign car manufacturers such as Audi have offered electric cars, the adoption rate of such cars is poor. EV penetration in India is extremely low at 0.8%, with four-wheelers forming a mere 4% of the total sales.

While Tesla’s arrival could spur the adoption of EVs in India, the price slab of the automaker could easily play spoilsport. Tesla’s popular Model 3 which costs $39,990 – $54,990 (approximately INR 60 Lakh with import duties) could be way off-budget for price-conscious Indian households.

The stalemate between the Government and Tesla continues to play out in the open. While there is no clarity yet on what will happen, local and other foreign players should pick up the pace and start manufacturing in India.