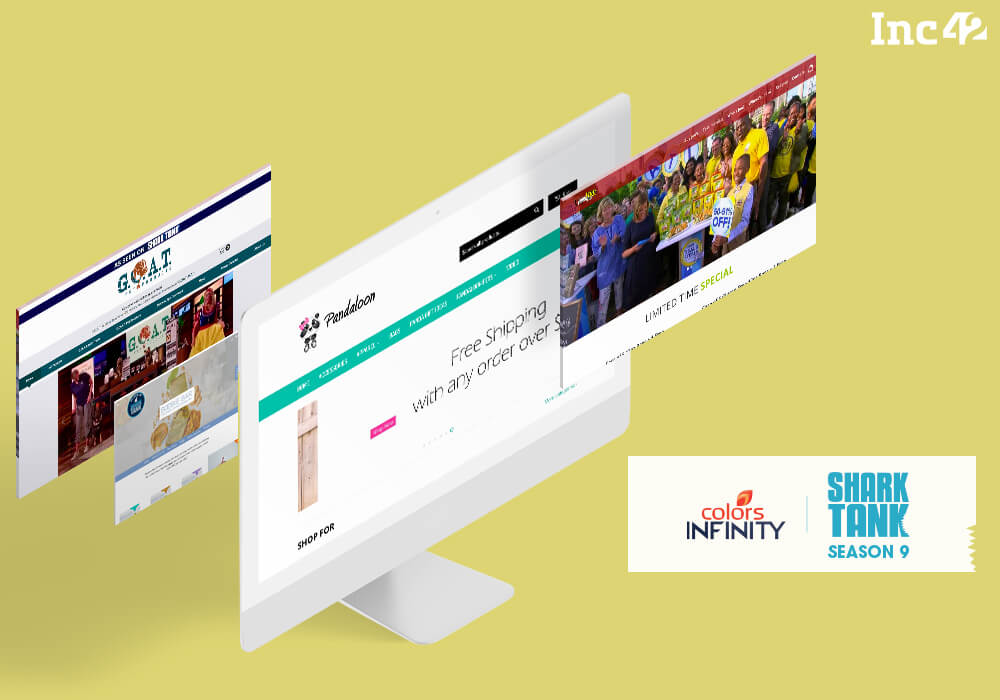 Pets are a woman’s best friends (as if you didn’t know that already). Pets are as important to people as, well, people, and they’ve spun off some really weird and whacky products ideas — from cat strollers to sex toys to ‘rear gear butthole covers’ (we kid you not). It’s butt natural (pun intended), then, that some of this pet mania would spill on to the hotbed of startup ideas — the Shark Tank.

In the latest episodes of Shark Tank Season 9, we saw startups coming with unique products for pets — from helping them speak to making them look their uber-cute. Wait, they remembered the humans too. There was a startup showcasing a unique solution to lactation problems of new mothers. We’ve all heard of pre- and post-workout protein bars for those fitness fanatics, but here’s a startup that’s come up with a nutrient-packed bar that increases lactation in breastfeeding mothers. Boobie Bar, anyone?

Boobie Bar is a lactation bar that promises to take the pain out of breastfeeding for new moms. It seems to be by far the most convenient and delicious way to ensure a constant milk supply for one’s newborn.

Wendy Colson, a lactation consultant, has witnessed mothers worrying about their milk supply and, as a result, sometimes swallowing up to 15 pills a day or brewing up to six cups of tea to boost production!

Boobie bar is made of a proprietary blend of organic lactation herbs in a delicious bar that’s handy to eat for the busiest people in the world — mothers. The startup was pitching for $150k for 10% on Shark Tank.

The company has a first-mover advantage as there are no lactation bars in the commercial market yet. One big question Mark had was that Wendy had not gotten any clinical tests done by a certified agency to back her claim that the product really worked. As of now, her belief was based on personal experience and, at best, anecdotal.

The Sharks seemed skeptical at this point but the repeat order percentage and a $700k sale figure brought Wendy back in the game. If lactating mothers are buying Boobie Bar, again and again, there can’t be a bigger proof that the product works!

Kevin and Daymond offered $150k for 20% equity. Daymond, who has a baby, could relate well to the problem and the solution. He wanted to make Wendy the face of the product. Boobie Bar went with Shark Daymond John to give the business a leg up. 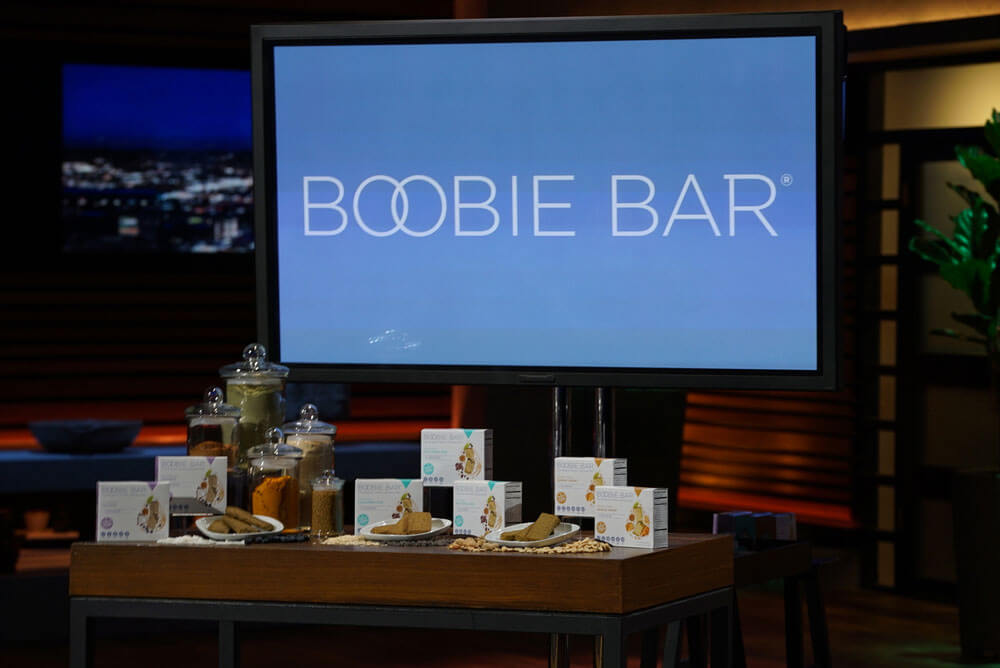 There was a fairytale, too, on Shark Tank Season 9, starring entrepreneur Michelle Winowich, who was Snow White to Axel, the dog who talked on the show. Yes, talked! Everyone, including the Sharks, looked more than amazed until the reality finally emerged.

Michelle’s startup G.O.A.T (Greatest Of All Time) has designed a pet product which allows a pet owner to programme her own voice to suit the mood of her pet. Not only this, they can also add music to suit the mood — dance music, lounge music and more — and even take a picture with the built-in speaker on the product. The startup was pitching for $499k for a 9% stake.

As weird as all of the above sounds, G.O.A.T had $2Mn in sales to boast off and that too in a single order. Kevin, who dissed the product right from the start, took it upon himself to make Winowich feel that the product was ridiculous and opted out. Mark bowed out simply because he did not believe in the pet industry; Lori and Daymond were next. That left only Robert.

In a very surprising turn of events, Robert, in fact, offered to invest the amount at a 33.3% stake. Michelle came back with a very weak counter, already not believing in it herself but finally bowed down to Robert’s offer. Like Mark said in the end — it is called Shark Tank for a reason.

Now, who doesn’t go through the crazy stress of ‘what should I order for my party’? Everyone, right? Joe’s Gourmet Fish Fry might finally have that stress taken off you with its seafood breading mix.

Maranda and Joe Dowell from Joe’s Gourmet Fish Fry definitely had their pitch rehearsed in front of the mirror many times over. Animated, coordinated, and perfectly in sync, the couple were pitching for $150K for a 15% stake. Claiming to be the fastest growing seafood breading brand in the US, Joe’s Gourmet is available in over 1,200 grocery stores across the country.

The sharks were quick to jump on the savouries presented by the Dowells and seemed to enjoy them alright, but the way to the Shark’s hearts doesn’t seem to be through their stomachs. Kevin O’Leary, Lori Greiner, and Mark Cuban bowed out of the deal up front. Robert Herjavec, after building some suspense, also opted out. In the end, it was left to Daymond John to seal the deal or not and seal the deal he did, offering the money the Dowells wanted but for a 25% stake. Maranda tried to put up a weak fight by making a counter offer of an 18% stake, but everyone knew Daymond was not only the best but their only choice. And they went with his offer. 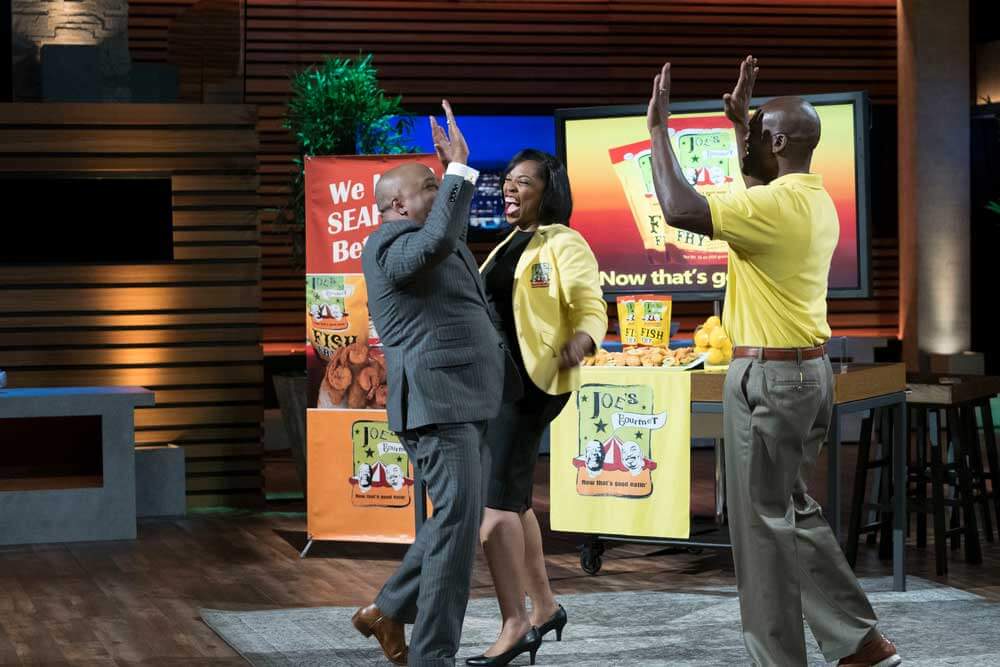 Eugenia Chen dressed her dog in a panda costume, put a video out for fun, and now has Daymond John as her business partner. Serendipity? Never underestimate the power of virality.

A video of Hexley, the dog dressed in a panda suit, received 140 Mn views on Youtube and a business was born. Eugenia was on Shark Tank asking for $60k for 20%.

Pandaloon is a line of soft furry costumes for dogs to make pets even more adorable and the best part is it gets a lot of laughs. The Sharks were in splits during the entire pitch and that was good enough a reason for them to go ahead with this business. Kevin thought it was downright bizarre to dress dogs up in costumes and Mark looked like he agreed with Kevin.

Eugenia, a veteran in the pet market, needed the money to meet minimum order quantities for production of costumes. Daymond made an offer to invest 60k for 35% stake and vowed to give away 10% to charity. Sara Blakely matched the offer, although the charity part was amiss. Eugenia will now be working with Daymond John to take Pandaloon to the next stage.

These were the top moments from the latest episodes on Shark Tank. Keep watching this space for more updates on the remaining action from Shark Tank Season 9!