Tech startup accelerator, GSF has announced the winners of its much awaited “Mobile Appies” Awards. The awards platform was facilitated to recognize best mobile apps in 13 different categories in which a total of 52 mobile apps competed.

Let’s have a look at the winners of Mobile Appies that was selected out of 4 identified mobile apps in each of the 13 categories. 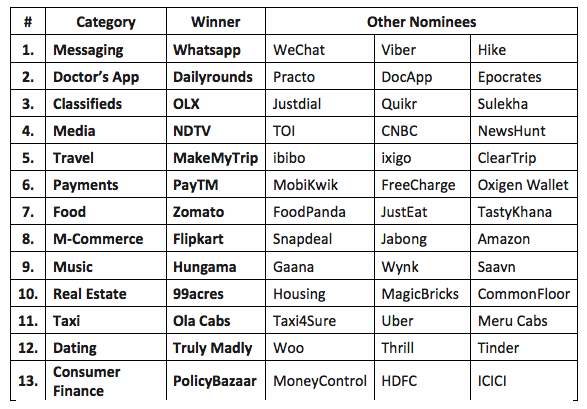 GSF had announced the awards in January 2015 in order to recognize innovative mobile apps that have created a paradigm shift in consumer behavior in India. The winners were selected on the basis of Design (UI/ UX), Features, User Base, App Store Ratings and one category related criterion by GSF expert panel and public polling. Additionally, GSF and the expert panel also selected seven apps for the seven awards that cut across different categories:

GSF Accelerator provides support to the startups in 5 key areas: Product Development (MVP), Go-To-Market Strategy, Global Expansion, PR & Marketing and fundraising.GSF Accelerator has funded 33 startups in 3 batches since its launch. Out of the 33 startups funded by GSF Accelerator, 2/3rd have raised seed rounds and 8 have raised VC led series A rounds. Recently GSF has also launched Digital Media Labs which will train and fund 10 digital media and advertising tech startups in 2015.