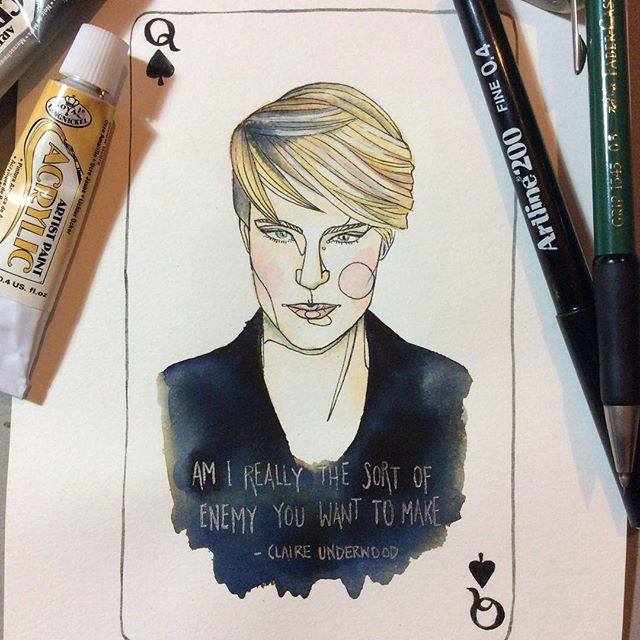 Spoiler Alert: The article has references from Season 4 of the show, which went on air on March 4, 2016.

“A cold fusion of two universal elements. Identical in weight, equal in force. United they stand. A union like none other. The un-splittable atom of American politics.”

As Claire Underwood read this segment of the first chapter of Thomas Yates’ book out to her husband Frank Underwood, they both knew this fictional award-winning writer was absolutely spot on about the husband-wife duo’s relationship dynamics.

Claire and Francis Underwood, played by actors Robin Wright and Kevin Spacey, are the protagonists of the powerful and binge-worthy ‘House of Cards‘ – an American political drama television series. After being passed over for the position of the Secretary of State, South Carolina democrat Frank Underwood (and House majority whip) retaliates hard, and instead of becoming the Secretary of State, he ends up becoming the President of The United States. But, it was not just Frank who had the fire in him, Claire is an equally formidable character whose steely-eyed determination and specific skill set catapulted this power couple into becoming the most powerful couple in the world.

Talking about formidable women, in India, the number of women entrepreneurs has been constantly growing the country’s startup ecosystem. Back in 2014, the OECD Economic Survey of India suggested that female entrepreneurship was growing in India, especially in the manufacturing sector, where women account for 40 per cent of entrepreneurs. Many of these entrepreneurs have accomplished great success; their startups being among the top in the country. However, this success is not easy to attain. These women had to undergo immense adversity and hurtful discrimination. But this has not deterred the numerous women in India who aspire to become successful entrepreneurs, and we think they can learn a great deal from the awe-inspiring Claire Underwood.

Love her or loathe her, you just can’t ignore Claire. This woman knows exactly what she wants and is well aware of how to get it; not because her husband is the POTUS, but because she’s Claire Underwood. Even in Season 4, which was recently released, we can witness the tenacity of this character; making even the master of connivers, Frank Underwood, accept that he is nothing without her. Claire has achieved this with a very specific set of skills, something that  women entrepreneurs of today should take note in order to succeed in this dog-eat-dog world.

Here are some of her noteworthy attributes that women entrepreneurs can relate to:

The Value Of Partnership 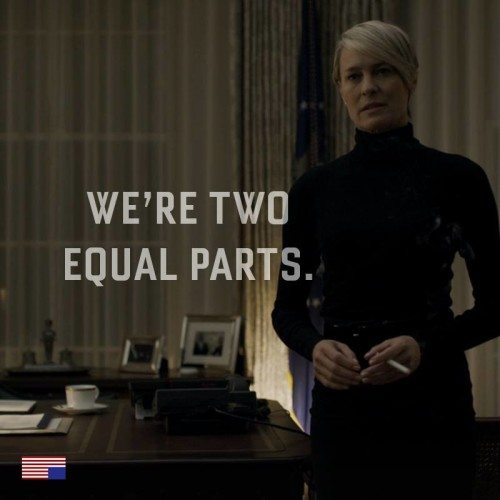 Claire is the reason why Frank is the President today; they both complement each other in a weird yet effective way. Their marriage might be tumultuous, but they don’t let it affect their partnership and are totally focused on their goals. Her ability to put aside petty differences and relationship insecurities has allowed her to be clear-headed and stay true to her goals. This is how a partnership between co-founders should work; especially when the co-founders are husband and wife.

The Word “Quit” Doesn’t Feature In Her Dictionary 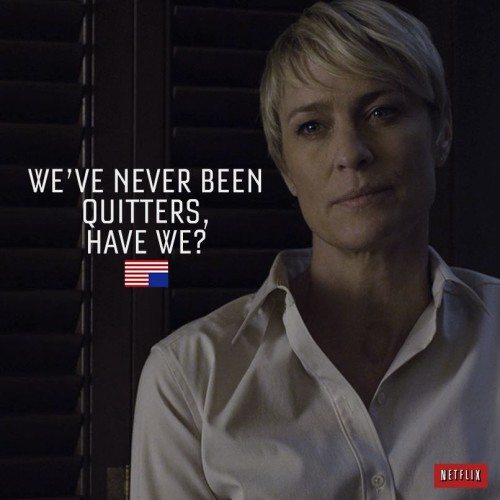 Be it raising funds for her organisation, or becoming the United States ambassador to the UN, or convincing the scheming Russian President, or even becoming the Vice President of the United States, Claire will stop at nothing to achieve her goals. All these goals have near-impossible challenges associated with them, but she has never once quit. On the contrary, on numerous occasions, she has skillfully turned these obstacles into opportunities. Women entrepreneurs have to deal with adversity at every step of their journey and the ones who don’t consider quitting as an option are the ones who succeed.

She Doesn’t Let Ego Get The Better Of Her This is what Claire said to Frank when he was put in a difficult position by his opponent. This statement clearly suggests how brilliantly she handles her ego as well her husband’s, who is very egoistic. Claire never minds apologising or taking the high road during a confrontation. This has saved her from burning a lot of bridges, which she knows would lead her to her goals. This is an important learning that can go a long way in helping women entrepreneurs in building the necessary connection in the ecosystem. 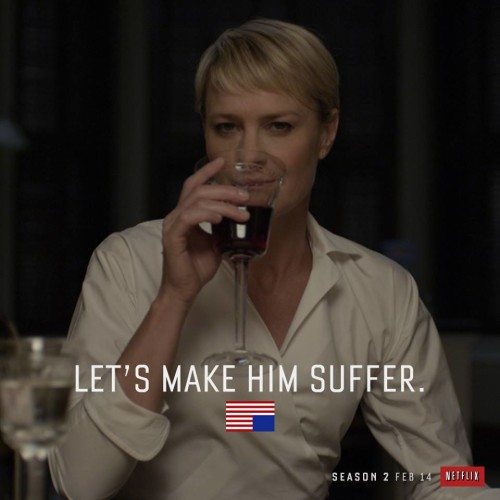 “Am I really the sort of enemy you would like to make?”

This statement that Claire made is one of the many proofs that suggests that she can be a menacing nemesis. Don’t let her fool you with her good-natured behavior. If you poke or threaten her goals, she will retaliate with brute force. A show of strength is imperative for a women entrepreneur; a caution to all those who plan to take her for granted and consider her weak. Women entrepreneurs can certainly learn a thing or two from Claire Underwood, when it comes to taking down enemies.

She Has Mastered The Art Of Networking Claire knows how important networking is; it is something that has helped her time and again to achieve her goals. She has her personal connections, so doesn’t need to rely on her husband’s connections. If she needs something done, she knows which strings to pull. However, it’s not that she requests for these favours from these connections. She knows the importance of putting something of value on the table from her end; it’s purely on barter. She always knows exactly what to offer, in order to get exactly what she needs, so that she doesn’t owe anyone anything. 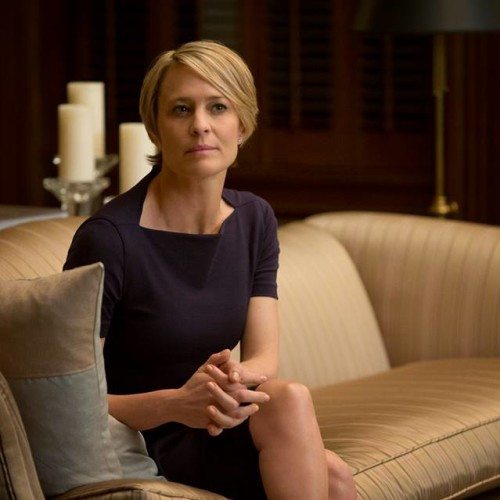 Networking events goes hand-in-hand with power dressing. Claire has an impeccable sense of style. Those well-tailored jacket and dress combo, razor-sharp pencil skirts, gorgeous gowns, coupled with those chic glasses oozes professionalism at its graceful best. Ladies, it’s time to fill up your wardrobes with some Claire-inspired dresses.

The Art of Composure 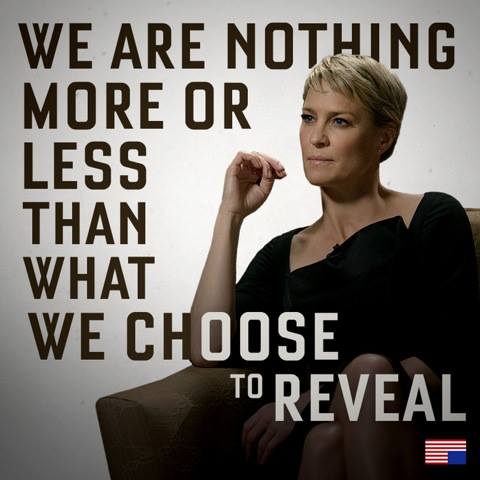 Claire might be going through tremendous pressure and pain, but she never lets her emotions dictate her actions in public. She will always be steely-eyed and be thoroughly composed while dealing with people, especially the media, who would do anything for an emotional outburst from her. Being a successful woman entrepreneur would mean more media exposure. In order to survive the bite-hungry media, composure is a highly desirable quality. Even though you might be going through a lot of pain, don’t let the media or the people (who don’t matter), detect that pain. 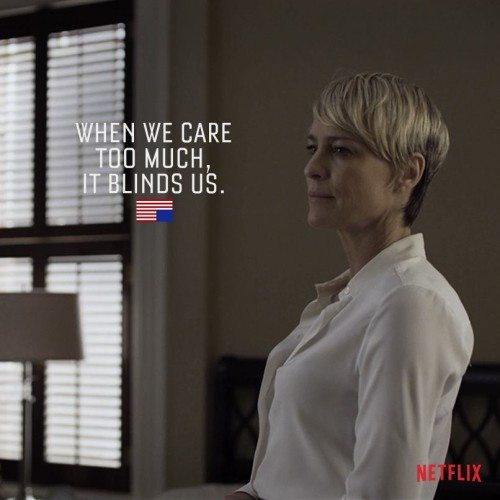 Claire might be this powerful and formidable woman, but at the end of the day, she’s only human and has her flaws. Her strength comes from the fact that she accepts her flaws and turns it to her advantage – a very important lesson for all women entrepreneurs.

P.S: Although, the fictional character of Claire Underwood is bestowed with all these qualities, not all her methods are socially acceptable, or sometimes even legit. We are only vouching for the attributes mentioned in this article – follow her other qualities at your own risk. Happy Women’s Day to all you, brilliant women entrepreneurs! 🙂