7 Ridiculous Ideas that Made Millions

7 Ridiculous Ideas that Made Millions 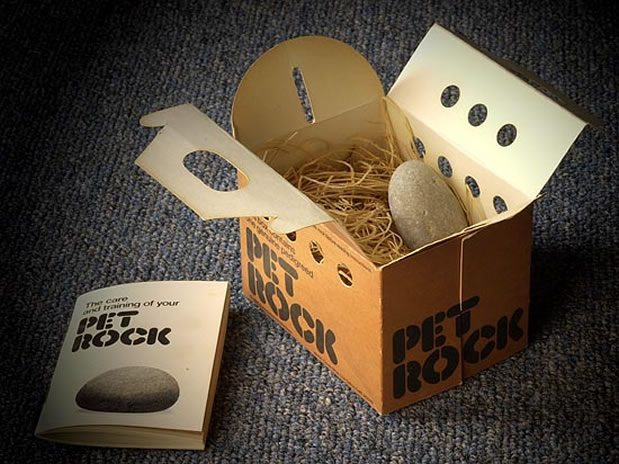 Have you ever gone window shopping  and thought “I would have thought of this” or “This product is so simple, anyone can do it!” We all get that feeling , we all have probably even had a few ridiculous ideas from time to time. Sometimes you simply never know how popular a simple and “silly” product could be! But few act upon their ideas, simply because they seem too silly or ridiculous. However, some of the most popular inventions nowadays came from the success of a very silly idea that turned into a cash cow.

This product is so simple, anyone can do it!

I ran away from #foreveralone

1. Pet Rock: The idea of selling a rock might seem ridiculous, let alone making millions out of it. Gary Dahl figured out how to sell his idea and make $$$. He sold a rock for $3.95 on a bed of hay with complete packaging that includes manual and a cardboard box that can be used as a pet carrier. The rocks became extremely popular and one of the “greatest inventions” of it’s time.

There was a Middle Eastern version of this site. It failed miserably.

2. Million Dollar Homepage: Creating a page with a million pixel images and selling each pixel for one dollar would sound like an easy way to make a million bucks in a fantasyland. Sounds stupid right? Let me introduce you to Alex Tew. He was 21 years old when he first thought of it. People started to think that this was a joke until all pixels were sold and made a brand out of it.

I haz a funny name and no purpose in life

3.Slinky: The slinky was born when Richard James’ dropped a tension spring he was working with and watched it slink away across the floor. The first 400 sold out within 90 minutes with only $1. Later the inventor estimated a profit of around a quarter of a billion.

4. SantaMail: Imagine you’re Santa Claus, living in the North Pole and charging parents 10 bucks for each letter you send back to their children. WTF right? Byron Reese, pretended to be Santa Claus and got a postal address in a place he would never be like the North Pole. He sent around 200,000 letters since 2001 and made a fortune out of it.

The Hulk should wear one of these.

5. Mood Rings: I’m sure you heard of these rings as they have been around for quite a long time. When they were first introduced in the 70’s they cost around 45$ and they soon became a fashion. Nowadays they are available for just $2.These rings can tell in what mood are you by changing the color of the liquid crystals that reacts to the fluctuating human body temperatures.

I am a really annoying fish who can sing. SPEND on me!

6. Big Mouth Billy Bass: These singing fish were one of the biggest obsession in the 90’s. They were EVERYWHERE! You would find them literally everywhere, in pubs, cafes, at home, and even in your favorite movies and TV shows. It plays Al Green’s song “Take Me To The River”!

Yeah I was the shizz when Bieber was just a baby.

7. Furby: After the release in 1998, the creator of these furry small electronic and interactive pets I must say became millionaires. They sold over 40 million pets worldwide till today. And all they really did was mumble in a weird language.

The point is it isn’t about how serious your product is, it’s mostly how you sell that product. People are so diverse and many things could appeal to different kinds of people, no matter how silly they may sound. There’s no such thing as a bad idea, it may not be the right idea at a certain point of time or during a certain situation, but all ideas mean something and the above examples show just that.

Feel free to comment or suggest any ridiculous ideas below! You never know which one might make millions.