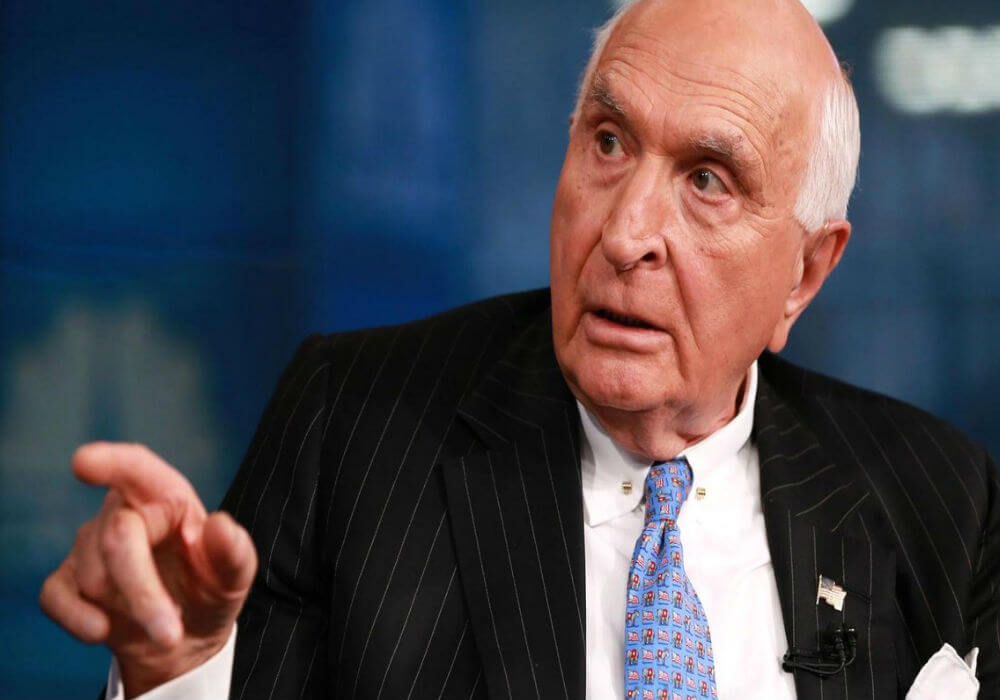 I got to spend two hours with Ken Langone, the billionaire co-founder of Home Depot. I got to ask him all the questions I wanted. And then I told him I’d never been to one of his 2,274 stores.

He screamed it again. “A pox on your house!”

My producer was laughing. I don’t know what I looked like. I’ll have to watch the video to find out.

“May all your faucets leak!”

“May all your windows have drafts!”

I tried to explain. “I would hired a contractor to do it for me.”

He said, “If you were enlightened, you would say to the contractor, ‘You ought to buy everything at Home Depot.”

He kept telling me to look.

He’s 82 years old, a billionaire. He works everyday (still). His marriage is a success (61 years). His kids like him. They’re happy. He’s happy. So when he tells me to “look,” I listen.

“Look,” he said, “every once in a while, people need leadership, OK? You exercise your leadership and tell him.”

I could see why he’s so successful.

Here are five lessons from Ken Langone about building wealth, success and value, but also about honesty, sticking to your word and “putting your money where your mouth is.”

Ken kept telling me how great his assistant is. “Christ, take my eyes out of my head before you take Pam away from me.”

Ken had a story and something nice to say for everyone.

He said he and his co-founder Bernie Marcus wouldn’t walk into a Home Depot without collecting a few carts from the parking lot first.

About Frank Blake, CEO of Home Depot, Ken said, “Make no bones about it. I can’t think of anyone that stands up to Frank as a CEO of any corporation I’ve ever been involved in.”

He also had a rule: Don’t be fake.

We all lean on people. And the people we lean on can either be step-stools or they can be people.

“Anybody that thinks I’m saying there’s no such thing as a self-made man is wrong. I’m saying, as it relates to me and me alone and nobody else, I am the result of a lot of people’s hard work.”

“Take people off the Earth, it’s a big, round blob of dirt.”

Accomplish What You Want

Ken said it’s going to be hard for my listeners not to say, “This guy’s full of shit.”

He was about to tell me what’s at the heart of his work.

I asked Ken what he thinks.

He said, “I had lunch with Jeff Bezos last December and I tell people, ‘Be careful with Bezos.’ He’s smart and he’s humble. That’s a winning combination. A guy that, no matter how gifted he is, can relate back to people who are not so gifted. That’s a winner.”

Then he said, “I think a fundamental characteristic of an intelligent person is an incurably curious mind.”

Amazon competes with everyone because they serve everyone. But that doesn’t scare Ken.

This is my favorite lesson from Ken. As soon as we left the studio, I tweeted:

They don’t just train good people. They hire them. And then those people grow. And the company does, too.

I wish I could remember my old idea of a billionaire, who these people are, what they sound like, act like, etc.

Maybe I would’ve drawn up a monster or someone fat, selfish and hungry.

I’d be wrong. Every billionaire I’ve ever talked to is kind, they smile, they laugh, they feel feelings. They’re all individuals with different personalities but they have a strong moral compass, a hard dedication to their endeavors, and an ease about them.

I’ll show you just how human Ken really is…

He said, “Be careful with my humility.”

“No, I’m serious,” he said. “I even challenge myself sometimes. Am I really being humble or am I playing to the crowd?”

Ken’s book includes his personal history. You see him growing up in Roslyn Heights, New York during WWII. You get to know his father who was a plumber. You see his small beginnings.

You see why he ended our interview by saying, “All I can tell people is we live in the greatest country on Earth. This would not have happened to me except I was blessed to be born in America and I mean that from the bottom of my heart.”

“I think faith is a strong part of your story of success,” I said.