In the quarter, average data consumption per user per month reached 13.3 GB and average voice consumption was at 823 minutes per user

JioMart and JioBusiness solutions for SMBs have seen growth and scale in the past year, said Reliance Jio 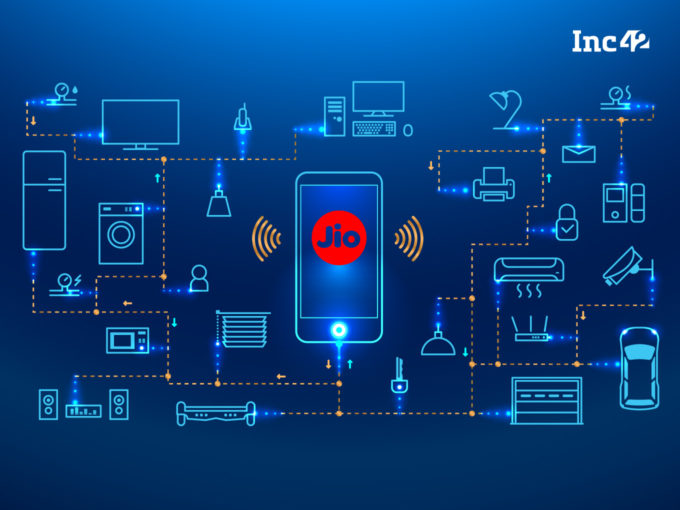 Mukesh Ambani-led Jio Platforms Ltd (JPL), the digital subsidiary of Reliance Industries Ltd (RIL) reported 19% YOY growth in operational revenue in FY21 to INR 18,278 Cr. On a sequential basis, it reported a 6% decrease in operating revenue compared to INR 19,475 Cr last quarter. RIL’s telecom arm Reliance Jio Infocomm (RJIL) comprised a bulk of JPL’s earnings at 95% even as the management said that they have been scaling up Jio’s portfolio of digital offerings.

In Q4, JPL reported flat net profit growth on a QoQ basis at INR 3,508 Cr compared to INR 3,489 Cr reported in the December quarter. On a YoY basis it grew 47.5%. Note that RIL did not report numbers for JPL during the same quarter last year. 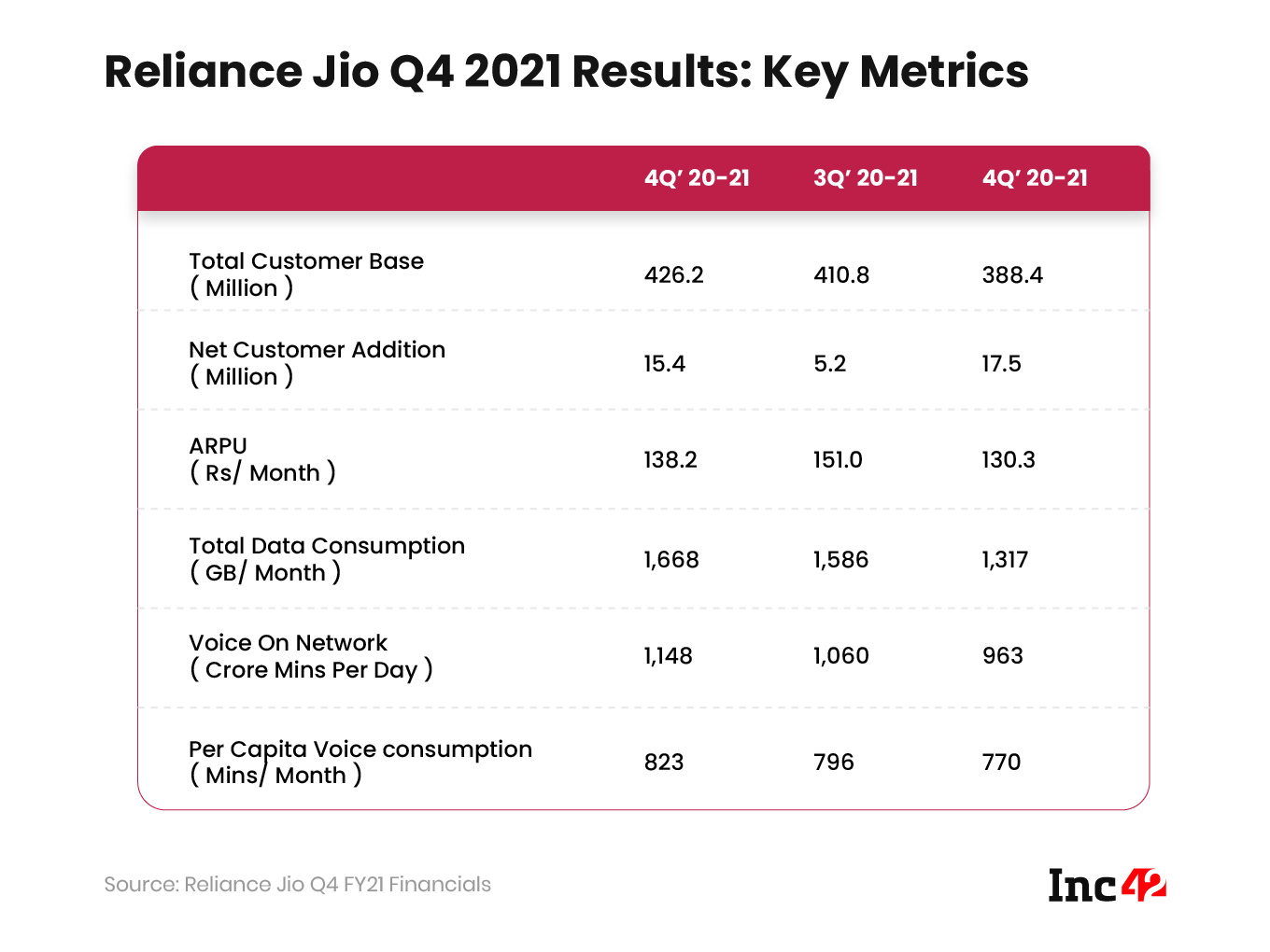 Speaking about the subscriber growth that has been Jio’s pillar in the past year, Ambani said, “Jio has a highly engaged 426 Mn customer base and remains committed to enhancing digital experiences not only for our existing customers but, for all individuals, households, and enterprises across the country. With its path defining partnerships over the last couple of years, Jio will continue to strive towards making India a premier digital society.”

Why does it matter? Because JPL’s vision of a digitally connected ecosystem  depends on economies of scale.

Telecom Accounted For 95% Of Revenue

Incorporated in December 2019, Jio Platforms Limited is an umbrella platform for all the Reliance-owned digital businesses including Reliance Jio Infocomm, JioGames, JioHaptik,MyJio, JioMeet, JioTV, JioCinema, JioNews and JioSaavn. JioMeet, crossed 15 Mn users during the quarter. But with most of these services yet to penetrate the larger market, the company has been depending on telecom for most of its revenue.

The telecom arm reported a 6% dip in operating revenue QoQ to INR 17,358 Cr during Q4. Average revenue per user (ARPU) fell to INR 138 from INR 151 in the previous quarter, in line with market estimates. The telco ended the quarter with 426.2 Mn users, up 15.4 Mn users over the previous quarter.  During Q4 FY21, average data consumption per user per month was 13.3 GB and average voice consumption was at 823 minutes per user per month. 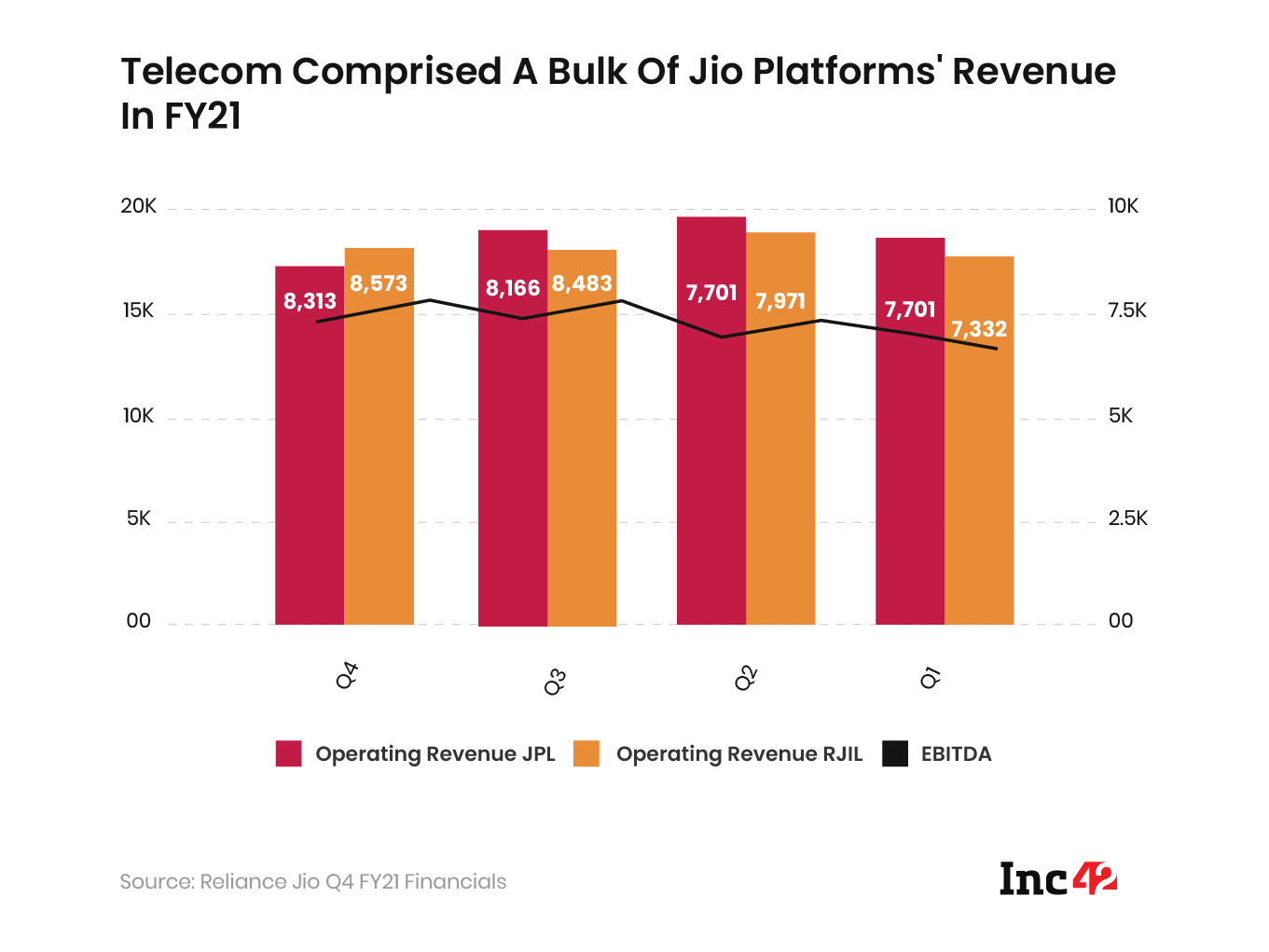 Over the past four quarters, Reliance Jio’s ARPU grew steadily from INR 130 (Q1), INR 145 (Q2) and INR 151 (Q3) as it stabilised from the impact of disruption caused by the first lockdown in 2020. However, the Q4 ARPU dip was largely expected due to Jio making off-net domestic voice calls from Jio to any network, anywhere in the country, free from January 1, 2021 after interconnect usage charges (IUC) on such services ended. Till end-December 2020, IUC was paid by the call-originating telco to the destination carrier.

According to a report by Jefferies Equity Research on 27th April, Jio has been witnessing a moderation in subscriber additions in recent times because of network congestion issues across metro and A-circles, churn of JioPhone users who are at the end of their three-year lock-in period as well as protests by farmers in part of North India. Analysts had suggested prior to Q4 results that Reliance Jio will need a tariff hike to sustain its earnings growth in the coming quarters to support improvements in the service quality and for spectrum acquisition.

“Given that a lot of people are now working from home, we could sustain 100% network performance for all of them,” said Anshuman Thakur, head of strategy, Reliance Jio in the post-earnings call.

“During this quarter the JioPhone 2021 offer was expanded to facilitate user migration from 2G to 4G and we have seen good traction for the same from customers,” added Thakur.

However, analysts have observed that the user response to JioPhone 2021 is much lower than what was seen when JioPhone first launched in 2017.

Thakur added that JioMart and JioBusiness offerings for SMBs have been scaled up during the quarter to expand the digital outreach across their customer base. The company has launched monthly plans from INR 900 to INR 10,000 targeting needs of all MSMEs in India. However, the lockdown has impacted the marketing of these plans.

During the quarter JioGames hosted multiple virtual gaming tournaments that were broadcasted live on JioTV and YouTube. Platforms like  JioMart, JioMeet, JioHaptik, JioUPI were scaled up during the quarter, said the management.

Interestingly, the Reliance Retail spokesperson Dinesh Thapar said that digital and new commerce services now contribute 10% of sales for the Reliance Retail. Part of this was led by doubling down on JioPhone and and overall electronics sales. In addition JioMart has also been integrated with Reliance Trends offline stores to address online orders.

The company claims that 80% orders on JioMart are now repeat orders.

JioMart has reported a 3X increase in its merchant base for the grocery delivery vertical in the fourth quarter of financial year 2021, as it expanded its services to 10 new cities, taking the overall presence to 33 cities. The company claims to be witnessing strong merchant traction from Tier 3 and beyond cities.

Over the last quarter, JioMart initiated an exclusive kirana onboarding process in 13 cities to get more merchants from these regions.

Jio Platforms also announced completion of testing of indigenously-developed end-to-end Jio 5G radio and core network solutions in the past quarter. Thakur added that including the recent spectrum auction and the trading agreement with Bharti Airtel, Jio has expanded its spectrum footprint by 56% during the quarter. Bharti Airtel is JPL’s biggest competitor in the telecom to digital ecosystem at present.

Recently, Indian telecom giant Bharti Airtel has announced a new corporate structure to sharpen its focus on digital assets and get maximum out of India’s digital opportunities. The company has merged all its digital business with the parent company Bharti Airtel under the new corporate plan, whereas a new subsidiary Airtel Ltd will house all of the company’s telecom businesses. The move is similar to rival Reliance’s restructuring of its digital services business in 2019 when it created Jio Platforms.

While Reliance often hinted at its digital and connected device plans prior to these investments, it is only in recent months that it has started breaking down the exact nature of solutions and monetisation opportunities. Jio Platforms raised over INR 1.52 Lakh Cr from 13 global investors last year, including from top investors including Facebook, Google, Silver Lake, Vista Equity Partners, General Atlantic, KKR, Mubadala, PIF, Abu Dhabi Investment Authority (ADIA), TPG, L Catterton and Qualcomm for a cumulative equity stake of 32.96%. According to recent reports, Jio Platform is looking to invest $200 Mn in the homegrown venture capital firm Kalaari Capital and pour more capital into Indian startups.