2016 has been heralded as the year startups stopped paying attention to inflated valuation and started paying attention to sustainable business models. Course correction and managing expectations were the watchwords as January slid into June and then onto the last few days of the year. While some still insist that the startup bubble has not burst, there is no denying that the halcyon days of raking in investor money are well and truly behind these intrepid businesses.

Investors too, have become cautious and backed sectors that are problem-solving at a macro level, and not blindly following the ecommerce or hyperlocal buzz. Edtech and fintech are two sectors who have benefitted from While the total number of funding deals in 2016 stand at a respectable 954 (till November 2016), the ticket size has come down drastically.

While last year Paytm got a $680 Mn boost in funding from Alibaba, this year’s largest funding round, that of Ibibo Group has only procured $250 Mn from Naspers and Tencent.

The trend, though not very hopeful, has shown that businesses are serious about making in India, and investors too, are bullish on the economy, as a whole.

With these thoughts in mind, we at Inc42, have curated the top funded startups of 2016 for our In Focus series that takes a look back at the year gone by.

The startups have been listed in descending order of individual rounds of funding received and is based on the amount of funding disclosed by founders and investors officially.

Ibibo Group is the only company in 2016 which raised the highest funds at the start of the year and then got acquired towards the end of the year. The online travel venture raised $250 Mn in February 2016 from global Internet and media company Naspers, and China’s leading internet firm Tencent.

Founded by Ashish Kashyap in 2007, the firm merged its operations with MakeMyTrip in October, this year.

Launched in 2000 by Deep Kalra, the company has, to date, done several investments and acquisitions including mygola, easytobook.com, HolidayIQ, Ixigo, MyGuestHouse, and more.

The messaging startup Hike was back in the news this year, with the announcement of a whopping $175 Mn fund raised in Series D round, at a valuation of $1.4 Bn. The investment was led by Tencent Holdings, Foxconn Technology Group, Tiger Global, Bharti, and Softbank Group. This takes the total funding raised by Hike, to date, to $250 Mn.

This year, OYO raised a total of $162 Mn funding in two separate rounds – a first round of $100 Mn was raised in April 2016, while $62 Mn were infused in August 2016. The investors who back the company include Japan’s Softbank, Sequoia Capital, Lightspeed Venture Partners, Greenoaks Capital, DSG Consumer Partners, Venture Nursery. Founded in 2013 by Ritesh Agarwal and started from a single city, OYO touched the 100-city mark last year.

Previously, OYO had raised funding from VentureNursery and a Seed round from Lightspeed Venture Partners and DSG Consumer Partners in 2014, and later, it raised $4.4 Mn (INR 30 Cr). from Sequoia Capital in October 2014. In March 2015, it raised over $25 Mn in a funding round led by San Francisco-based Greenoaks Capital, Lightspeed, and Sequoia at a valuation of $100 Mn. In August 2015, OYO Rooms raised $100 Mn funding led by SoftBank Corp and Lightspeed Venture Partners, Sequoia Capital India and Greenoaks Capital. 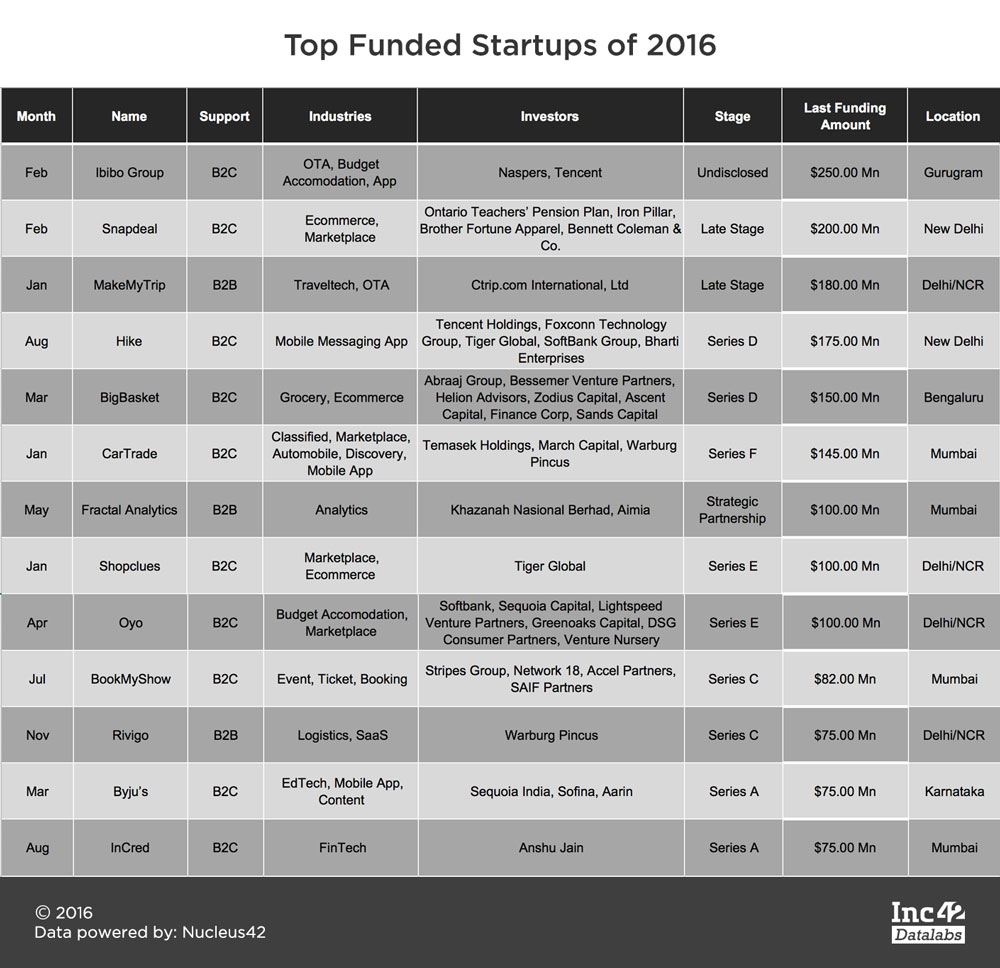 The only auto classifieds company that made it to the top 10 funded startups in 2016 is CarTrade, raising $145 Mn in January 2016. The round was led by Temasek Holdings, US-based investment firm March Capital, and existing investor Warburg Pincus. In 2015, CarTrade had raised an undisclosed amount from Chip Perry. Prior to that, the company had raised $30 Mn from Warburg Pincus, with its existing investors Canaan Partners and Tiger Global also participating in that round.

Edtech’s dominance continued with BYJU’s raising over $120 Mn this year in three rounds of funding. The first round of $75 Mn was raised in March 2016, then $50 Mn in September 2016, while an undisclosed round of funding was raised in December 2016. The startup is backed by investors such as Sequoia India, Belgium-based investment firm Sofina, International Financial Corporation (IFC), a member of the World Bank Group, Chan Zuckerberg Initiative (CZI), which was founded by Mark Zuckerberg and Dr. Priscilla Chan, Lightspeed Ventures, and Times Internet Ltd. The company was founded in 2011 by Byju Raveendran.

This year marked a milestone in ecommerce startup Shopclues’ journey, propelling it into to the billion dollar club. The company raised $100 Mn at $1.1 Bn valuation from GIC, Tiger Global Management and Nexus Venture Partners. Launched in 2011 by Sandeep Aggarwal, Radhika Aggarwal and Sanjay Sethi, Shopclues had earlier raised $100 Mn in Series D round in January 2015.

Another entry we saw in the $100 Mn funding group, was data analytics startup Fractal Analytics. The investment was led by Malaysian sovereign wealth fund Khazanah Nasional Berhad. This has raised the value of the company to close to $300 Mn (INR 2,000 Cr).

Fractal Analytics was founded in 2000 by a five-member team including IIM Ahmedabad alumni Srikanth Velamakanni and Pranay Agrawal, along with Nirmal Palaparthi, Pradeep Suryanarayan, and Ramakrishna Reddy. Prior to this, Fractal had raised funding three years back in June 2013, worth $25 Mn from private equity investor TA Associates.

Founded in 2007 by Ashish Hemrajani, Parikshit Dar, and Rajesh Balpande, this year’s funding for online ticketing platform BookMyShow was more than the total capital it has raised over the last six years. In July 2016, it raised $82 Mn along with the participation from existing investors Network 18, Accel Partners, and SAIF Partners. The current valuation of the portal is more than $442.5 Mn (INR 3,000 Cr).

Logistics platform, Rivigo raised its biggest round of funding in November 2016, also grabbing $75 Mn from an affiliate of Warburg Pincus, a leading global private equity firm focussed on growth investing. Founded in 2014 by Gazal Kalra and Deepak Garg, Rivigo had earlier raised $30 Mn in Series B round with equity and debt financing led by SAIF Partners and other investors.

Funding is the shot in the arm that all nascent businesses require to grow in scale and stature. While the year may not have been kind to startups in terms of overall numbers, it has definitely taken a turn for the better with more deals taking place after September/October 2016. Sectors have consolidated and the white noise around building a startup has been replaced with a single-minded focus on customer retention and sustainable growth.

Early-stage and late-stage fundings are expected to show an upward graph in the coming year, and we can only hope that investor confidence, which has so far plateaued, is renewed in the ecosystem with the introduction of many State Startup policies, governmental support in turning the country’s financial system digital and more.

Will 2017 be the year of burgeoning startups? The answer lies in the coming months and we cannot wait to watch the story unfold.

(With inputs from Aarti Venkatraman and graphics by Satya Yadav.)