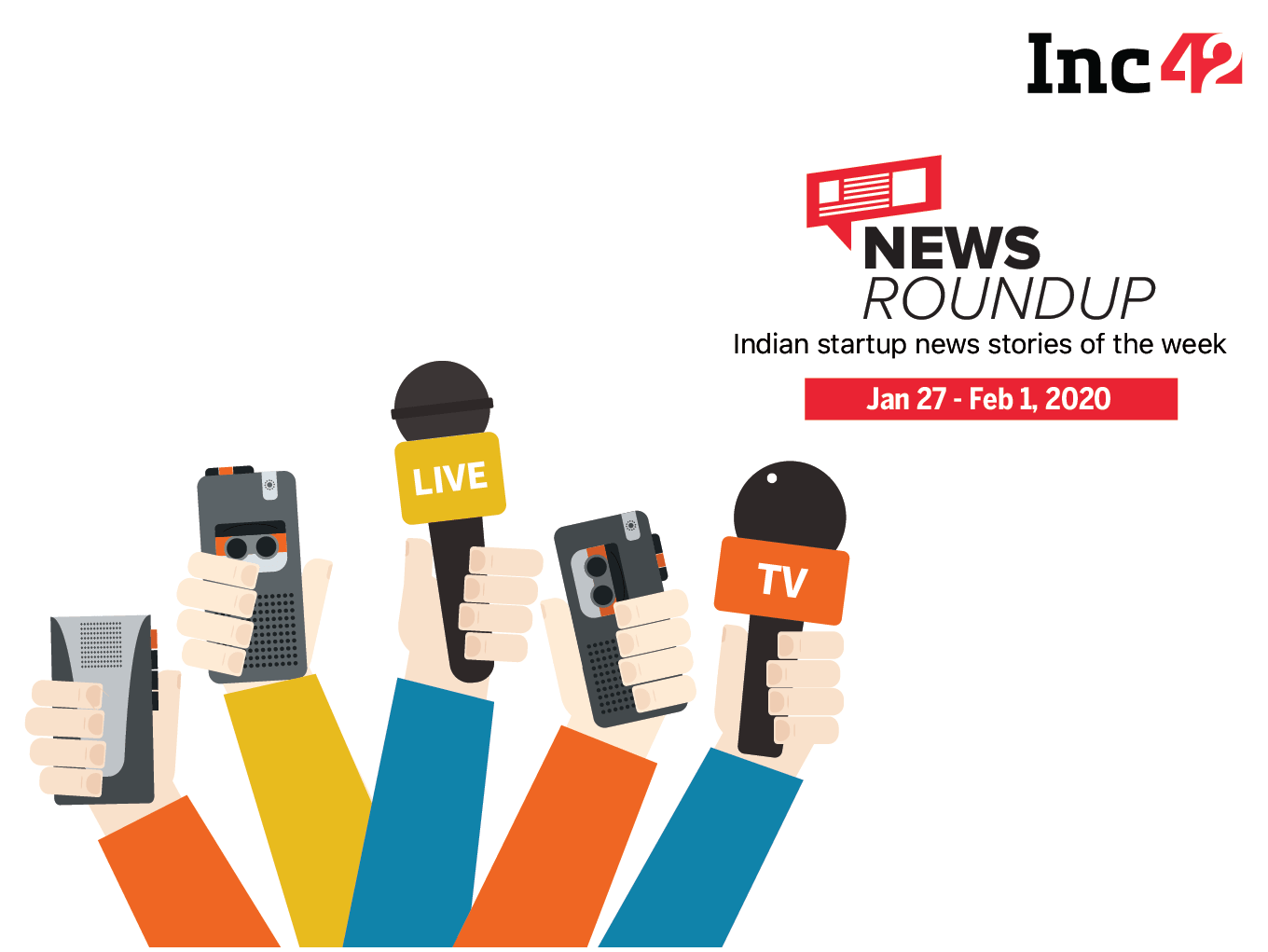 Ola has revised the payout structure for its drivers

The week is ending with the central government presenting its plan for FY20 as the union budget gets to the parliament today. Inc42 in its survey with investors, entrepreneurs and several startups has been closely following the sectors’ demands and expectations from the budget.

We are also reporting live on the budget to bring you the impact the union budget 2020 will have on the Indian startup ecosystem.

In one of the most important developments this week, the Indian government is likely to allow Indian companies to list their equity shares overseas to access a greater pool of international investors and increase their chances of expanding to other countries. In favour of this decision, the corporate affairs ministry and markets regulatory body Securities Exchange Board of India (SEBI) and other regulatory departments are optimistic about this move.

In another update, SEBI is also planning to introduce a new category of investors under foreign portfolio investors (FPIs) for non-resident Indians (NRIs) to invest in the Indian market. This decision comes to light after the Indian government had proposed the plans to merge the existing NRI channel with the FPI regime in the FY20 interim budget. If this is approved,  NRIs will be able to increase their investment portfolio and also trade stocks in Indian public market through overseas banks such as Citi, HSBC and others.

The national Startup Advisory Council chaired by commerce minister Piyush Goyal may onboard venture capital giants like SoftBank, Tiger Global Management and Naspers. The government believes that these venture capital firms are a right fit to be part of the advisory board as they have invested billions into the Indian startup ecosystem.

In the process of finalising the social media regulation, the Indian government has reportedly decided to axe WhatsApp’s end-to-end encryption in an attempt to curb online child abuse. The decision comes to light after the parliamentary panel set up by government had recently held a meeting with social media companies like Facebook, TikTok and ShareChat to understand their policies on pornography.

The Indian government is of the belief that such a move will enable it to track the origin or sender of such inappropriate content. It has also asked the internet service providers to proactively monitor, remove and report such content to the authorities. In addition to this, the panel recommended online search engine platforms to block searches on child pornography sites and also deny entry to underage children to access adult content online, along with the streaming platforms such as Netflix and other social media platforms like Twitter and Facebook.

Speaking at an industry summit in Mumbai, BookMyShow and Dream11 spoke about the existing gap in the unicorn club’s entry ticket. Dream11 cofounder Harish Jain said that valuation is just a piece of paper and means nothing, instead, the meaning of a unicorn should be changed to focus on revenue, so startups can look at making impact business outcomes rather than aiming to join the unicorn club and exits.

Acknowledging this, BookMyShow founder Ashish Hemrajani said that the unicorn club is a total fallacy. Hemrajani further said that the investor’s job is to exit, and entrepreneurs job is to leave a legacy behind, enjoy the journey and other byproducts that come along the way.

The ride-hailing unicorn Ola recently revised the payout structure for its drivers. After its decision to revise standardised commissions, the number of drivers on the platform has increased by 7-10% in seven metro cities, including Bengaluru, Mumbai, Chennai, Delhi, Kolkata, Hyderabad and Pune.

The new payout structure is said to give drivers more predictable and transparent earnings with an average take rate of 20% for the company, and also reserve up to 5% of earnings as incentives for drivers.

Ola spokesperson told Inc42 that the revised structure for drivers is designed to maximise revenue per kilometre and encourage the highest quality of service and availability on the platform in a sustainable fashion. Further, Ola said that this will create better engagement for drivers, resulting in increased supply, thereby serving the customers at all times.

After mass layoffs, it has come to light that OYO has suspended the campus hiring for now. Several business schools in the country, including IIM Bangalore, IIM Calcutta, IIM Kozhikode and SPJIMR have already completed programmes with no presence from OYO. From the class of 2020, OYO has hired five from IIT Kanpur, seven from IIT Kharagpur, and made at least seven offers at IIT Madras. It has hired at least four students from IIT Guwahati during final placements, and nine from Management Development Institute, Gurugram.

Further hotel chain ZO Rooms, which once sought a 7% stake in OYO parent entity Oravel Stays, has escalated its ongoing case in the Delhi High Court to explain its recent corporate restructuring. The first complaint in this case was filed by ZO Rooms in the Delhi High Court in 2017, after a proposed takeover deal by OYO fell through in 2016.

On January 21, 2020, ZO Rooms reportedly filed a plea against OYO’s decision to restructure its businesses and house them in new entities without informing the arbitrator or ZO Rooms. ZO Rooms was seeking a 7% stake in OYO parent — Oravel Stays as damages in the original complaint. It is now saying that since OYO has demerged its units, it will adversely affect the claim sought by ZO Rooms in the ongoing arbitration.

The High Court has asked OYO to file a response on the matter to the arbitrator within two weeks time as announced on January 24, 2020.

No Fee On UPI, RuPay Transactions If MDR Is Zero

The Indian Banks’ Association and National Payments Corporation of India (NPCI) have finally reached an agreement in a meeting held on January 27 that not to levy any fees on UPI and RuPay transactions as long as the merchant discount rate (MDR) remains zero. However, NPCI is reviewing other fees like payments service provider (PSP) fee and switching charges.

The tech-focussed venture capital firm Naspers, at the World Economic Forum (WEF) held in Davos, said that it will continue to double its investments in India’s tech startup ecosystem, especially the new-age credit and financial products. The firm said that it will continue to support entrepreneurs with original ideas as opposed to existing business models in the financial services market.

The CEO of Naspers Bob van Dijk optimistic about the Indian fintech landscape amid the slow growth said that there is still room to explore in terms of backing a new generation of startups with innovative ideas in the credit and financial services market.

India Working On A Strategy To End Counterfeits, Fake Products

Ahead of national ecommerce policy, the Department for Promotion of Industry and Internal Trade (DPIIT) is working on a mechanism to control counterfeiting and fake products as the number of complaints have increased in recent years which is acting as a revenue leakage for brands. It is said that the Indian government would examine the policy in the US which proposes higher oversight of warehouses and charge hefty fines and penalties for violations. In the US, the government has inculcated a strategy where the ecommerce platforms are liable for counterfeit goods.

Just after Amazon CEO Jeff Bezos visited India and his commitment towards acting upon climate change, over 350 Amazon employees have broken the company’s diktat asking them to refrain from publicly speaking about the ecommerce giant’s commitment to climate change.

The biggest criticism of Amazon has been its support to oil and gas companies like BP and Shell. Amelia Graham-McCann, senior business analyst at Amazon said in the medium post, “The science on climate change is clear. It is unconscionable for Amazon to continue helping the oil and gas industry extract fossil fuels while trying to silence employees who speak out.”

The retail giant Walmart has recently laid off 56 senior executives in India including vice presidents across various functions, including agri-business and the fast-moving consumer goods (FMCG) divisions from its India business. The employees who were laid-off wrote a letter to Walmart HQ in the US, both as a group and individually, stating that the move was unfair and had nothing to do with performance. The former employees revealed that Walmart went ahead with this despite assurances of job security in December 2019.

Replying to the letter, Walmart HQ assured the employees that a team from the US compliance and ethics will further investigate and review the matter with all applicable laws.

Apple CEO Tim Cook is expected to visit India in mid-2020 to take stock of the company’s operations in India and perhaps see the final preparations for the tech giant’s plans for Apple Stores and ecommerce business in India. Apple had earlier committed to invest INR 1K Cr in India to set up its first online retail platform in Mumbai and open three company-owned stores across major cities in the next two to three years. The first store in India was expected to be launched earlier this year. However, now the company has delayed this plan to the third quarter of 2020.

It is said that the company is looking to roll out its first store during the high sales period around the festive season and the launch of new iPhones in 2020.

At the event in Pune, the UK government announced to launch a £4 Mn ‘Innovation Challenge Fund’ in India which encourages industry and academia to collaborate and develop tech solutions to social, economic and environmental challenges. To apply for this fund, the applicants need to explain how their proposal will facilitate the development of a partnership with researchers, academicians, startups, SMEs, NGOs, policymakers and practitioners in India and abroad.

The vice president of global affairs and communications at Facebook Nick Clegg told BBC that the hack of Jeff Bezos’ phone wasn’t WhatsApp’s fault as it uses end-to-end encryption, which makes the platform unhackable. Instead, Clegg blamed Apple’s operating system for Bezos’ phone hack. He further said that the hack was similar to email phishing, which comes to life when one opens it. This must-have affected the phone’s operating system, he added.