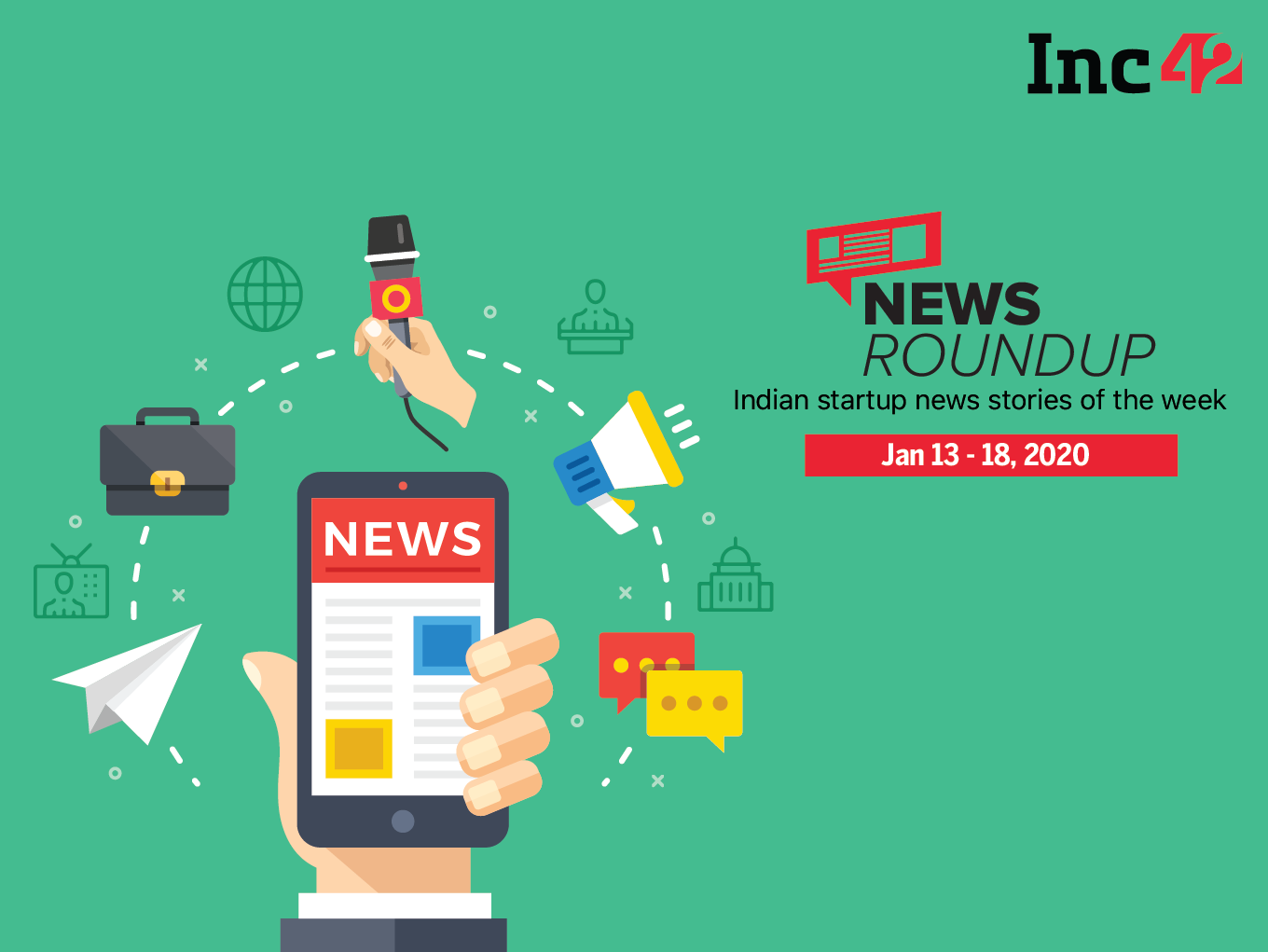 Amazon to invest $1 Bn to digitise Indian SMBs by 2025

Aye Finance investor Accion sells its stake to A91 Partners

SC to hear cryptocurrency case next week after IAMAI’s arguments

In one of the most important developments this week, Amazon founder and CEO Jeff Bezos stole the spotlight with his visit to India. From making a grand entry on stage at the SMBhav event in Delhi to meeting Bollywood personalities and industry leaders in Mumbai, Bezos surely created quite a lot of stir during his three-day visit in India.

At the SMBhav event on January 15, Bezos shared his commitment to India and his company’s future plans to help the country grow, sustainably. The event was attended by industry leaders such as Amit Agarwal, NR Narayana Murthy and Kishore Biyani among others.

Bezos said “I fall more in love with India every time I return here. The boundless energy, innovation, and grit of the Indian people always inspire me. I’m excited to share that we will invest an incremental $1 Bn to digitise micro and small businesses in cities, towns and villages across India, helping them reach more customers than ever before.”

In addition to this, he also said that Amazon will eliminate single-use plastic from the fulfilment network by June 2020. The company will be adding 10K electric rickshaws to its delivery fleet. Speaking to Bollywood star Shah Rukh Khan and film director Zoya Akhtar in Mumbai, Bezos said that the company is going to double the investment in Prime Video in the coming days.

On the flip side, Bezos visit to India did face minor hiccups and criticisms among the industry body, political leaders and traders associations alike. Minister of commerce Piyush Goyal had some choice words about Amazon’s plans for India.

In another update, it was speculated that the Amazon founder was supposed to meet Prime Minister Narendra Modi ahead of the national ecommerce policy. However, it looks like the meeting never happened. According to various media reports, one of the sources said that the government may have cancelled the meeting with the founder and CEO of Amazon to appease Indian traders, who have been aggressively protesting against ecommerce companies for flouting FDI norms, predatory pricing, deep discounting, seller bias among others.

As reports about the company’s toxic work culture surface, hospitality unicorn startup OYO has been making the headlines for its mass layoffs in the country. It is also looking at rapidly scaling back on the number of rooms on its platform to run a tighter ship — the pressure, however, seems to be coming from lead investor Japan’s SoftBank.

OYO has cut 65K rooms from its roster since October 2019 and has reportedly stopped selling rooms in more than 200 Indian cities. This also coincides with OYO firing close to 5% of the total 12K employees in China and 1200 people in India.

Paytm is looking to boost its revenue streams by offering lending services to users, apart from its existing UPI or peer-to-peer payments app. The senior VP of Paytm Saurabh Sharma said that the company has already run successful pilot tests, which have been used to build the product. The company has partnered with a lot of non-lenders to help expand its reach. In addition to this, Paytm is also exploring the possibility of getting an NBFC license and is converting the Paytm Payments Bank into a small finance bank.

Bengaluru-based PhonePe has been finding it difficult to raise funds from investors like Visa, SoftBank, Naspers, Qatar investment Authority, Canadian Pension Plan and others. Clarifying the report, the company’s spokesperson told Inc42 that it remains very bullish on the business prospects and continue to meet its capital needs. PhonePe confirmed that it is not actively looking to raise funds externally unless it is for strategic purposes.

US-based non-profit organisation Accion sold its stake in Aye Finance to Indian VC A91 Partners. In the span of two years, Aye has grown from INR 500 Cr to over INR 1500 Cr of assets under management, the company claimed, using technology as a backbone to scale the business. The company offers financial services to small and medium-sized informal businesses and entrepreneurs.

The president and CEO of Accion, Michael Schlein said that in the company had supported Aye Finance since its initial days with capital and advisory services. “We are proud to exit five years later knowing that Aye has reached more than two hundred customers and is on a clear trajectory to continue growing and advancing financial inclusion,” Schlein added.

No Changes In Zero MDR For Fintech Companies: FM Sitharaman

As fintech companies look to government support to boost revenue and make it easier to acquire users, FM Nirmala Sitharaman said that the government is not likely to make any changes to the zero merchant discount rate (MDR) policy.

The FM said that instead of the government support in reducing customer acquisition costs, fintech companies must continue working with banks to acquire merchants. Further, Sitharaman said that the amount saved by banks in handling less cash has to be used to tie up with fintech companies and boost the digital payments ecosystem overall.

SC To Hear Cryptocurrency Case Next Week After IAMAI’s Arguments

After the RBI’s announcement of banks to withdraw all support services that were being extended to crypto entities on April 6, 2018, many crypto companies shut shop and dozens of them went to the court. Recently, the internet and mobile association of India’s (IAMAI) arguments for the last three days, the Supreme Court has set the next date of hearing on January 21.

Sumit Gupta, cofounder and CEO of CoinDCX, one of the petitioners in the case told Inc42 that IAMAI counsel Ashim Sood put across a strong series of arguments in favour of open crypto regulation and why outright banning is not the right move for India.

As Jeff Bezos took in the sights and opinions from industry stakeholders, celebrities and others during his three-day visit to India, the competition commission of India (CCI) urged ecommerce companies such as Amazon and Flipkart to follow a transparent method to ensure brick-and-mortar stores don’t run out of business.

“If you are absolutely lean, come out, put the details on your website. So that everybody knows and there is nothing to hide,” said Ashok Kumar Gupta, chairman of the CCI.

Ahead of finalising the ecommerce policy, the department for the promotion of industry and internal trade (DPIIT) had arranged for a stakeholder meeting on January 14. At the meeting, DPIIT discussed the merits and demerits of draft ecommerce policy on data storage. Some of the companies that participated in the meeting, include Accenture, Adobe, Facebook, Genpact, Google, HCL, Infosys, Intel, Microsoft and TCS among others. Nasscom, Ecommerce Council of India, Informational Technology Industry Council, CII and FICCI will also attend the meeting.

The Confederation of All India Traders (CAIT) announced that after a pilot in Madhya Pradesh to create individual e-stores for traders. The traders’ body said that it will be launching the platform across India. Praveen Khandelwal, secretary-general of CAIT said that ecommerce is growing rapidly in the recent past. This completely aligns with the trading community with ecommerce by creating individual e-store of every trader in the country.”

Khandelwal also said that CAIT is not against ecommerce, it is only against companies that are flouting FDI policy of the government for their own gains.

One of Uber’s key investors, Goldman Sachs has sold off its holdings in the company in Q4 2019. According to a media report, the investment bank was disappointed in Uber’s performance in the stock market decided to sell off the holdings in order to cut its losses.

The CFO of Goldman Sachs Stephen Scherr said that the company took the ‘harvesting opportunities’ in the third quarter of 2019 and sold off some of its holdings. He further said that the bank would keep reducing the exposure in its investments which totals $2.4 Bn at the end of 2019.

No Ads On WhatsApp

The social media giant Facebook had reportedly planned to sell ads on its instant messaging platform WhatsApp. But now it looks like it has decided to go clean and said no to ads on its messaging app. However, the company had deployed the team that was set up to brainstorm on the best ways to amalgamate ads into the service. The integration of ads on the instant messaging app was meant to facilitate communications between businesses and customers and also generate revenue in the process.

American venture capital investors Tim Draper criticised the passing of the Citizenship Amendment Act (CAA) by the government and the violence and protests that have evolved. Draper has written an open letter to the Indian government and Prime Minister Narendra Modi.

In the letter, Draper clarified that he has a very special connection with India since his father was the first venture capitalist ever to focus on India with Draper International. While he praised the government’s demonetisation decision, which boosted fintech and digital payments, Draper shared his concerns around the country’s regulation policies.

The open letter from Draper comes after, he had tweeted saying that India choosing one religion over another makes him seriously concerned about his plans to fund business in the country.

The global music streaming app Spotify has signed a multi-territory licensing agreement with music label company Warner Chappel over music licensing in the Indian market. Both Warner Chappel and Spotify has now come to an agreement and have jointly asked the Bombay High Court to dismiss the pending litigation involving the two companies, which had gone for almost 11 months now.

Spotify told Inc42 that the company is pleased with the agreement, and together with Warner Chappell, it is looking forward to helping songwriters and artists connect with more fans, and also for more fans to enjoy and be inspired by their music. Warner Chappel also said that they are positive about the outcome. “This new deal appropriately values our songwriters’ music and expands our licensed partnership with Spotify to include India,” the music label company added.